The city is working on a major reconstruction and redesign of the industrial street that also serves as one of the most vital bike connections for West Seattle, the Duwamish Valley and beyond.

As a regional bike route, the street must include a complete, safe and intuitive facility. At the same time, this street is somewhat unusual in that it has low personal car traffic (though that could change when the downtown tunnel highway opens). Instead, the mix is mostly people walking and biking and people driving very large trucks to access the Port of Seattle driveways. It’s a street that almost only has the extremes in vehicle sizes, and that may actually be an opportunity instead of a problem.

E Marginal Way is the city’s best chance to showcase how comfortable, predictable and separated biking and walking routes are good for freight.

It’s obvious that the modes cannot mix, and on that point essentially everyone agrees. This need is highlighted by the tragic May 2013 death of Lance David at E Marginal and S Hanford. David was the father of twins who lived in Federal Way and biked to work in downtown Seattle. 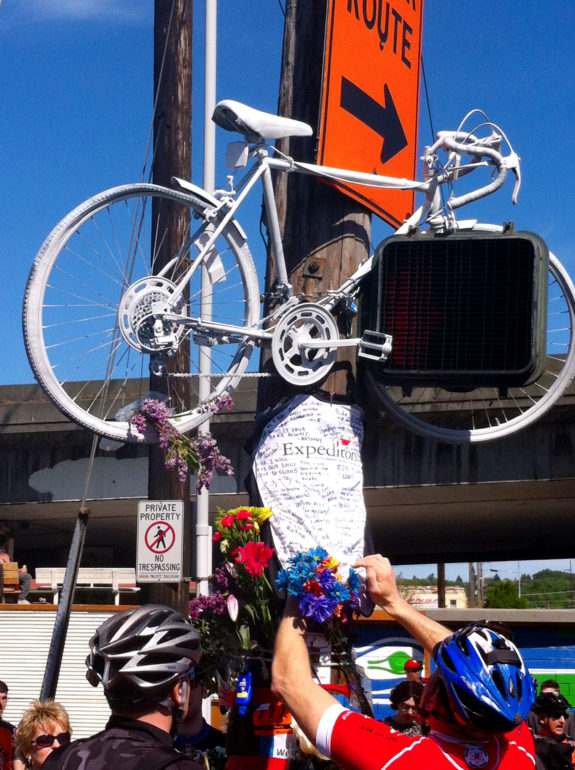 So we know people biking and walking need to be separated from heavy trucks, and we know those connections need to be complete and intuitive. What’s the best way to do that?

The online open house includes three options for the north segment between Atlantic (where the Alaskan Way Trail ends) and Spokane (where the Alki Trail to West Seattle ends). It also includes some ideas for the southern segment between Spokane and the 1st Ave Bridge, which we will discuss later in this post. 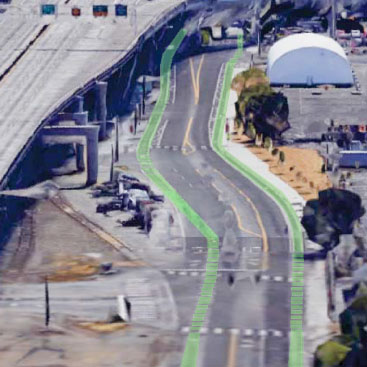 This option is basically what currently exists, but with wider buffers between the paint-only bike lanes and the general traffic lanes.

The bike lane and right turning traffic lane still cross each other at S Hanford, which is not the level of separation this project should be aiming for.

This option also doesn’t fix the lack of a quality connection at Spokane, an area where today people biking northbound choose many different methods for getting to the northbound bike lane, some crossing at the signal at Spokane and others biking down the west sidewalk for a bit before picking a spot to cross.

When you have a lot of users making many different route decisions in the same area, that’s a clear sign that the street design does not have an obvious and intuitive option that is direct and safe. The status quo fails by this measure, so the new design needs to do better. Option 1 doesn’t cut it. 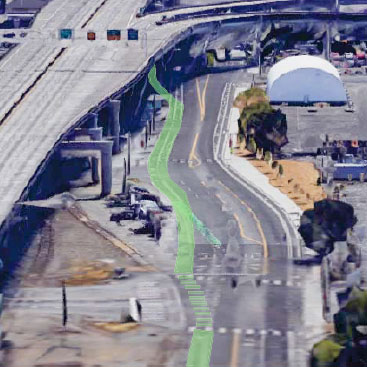 This option would essentially shift people biking to the east side of the street while keeping the sidewalk on the west side. A two-way bikeway on the east side could be a strong option because it will avoid all Port driveway crossings, and it should include fully separated phases at the few intersections it crosses.

This option could be more intuitive at both the Spokane and Atlantic connections if the designs of those intersections are done well, but that’s a big “if.” Requiring a significant wait at the crossing at Spokane might result in people continuing to find a shorter route by using the west sidewalk, which is the problem we have today.

The connection at Atlantic is vital and could be tricky. A lot of northbound truck traffic will be trying to turn across the bikeway, which would be between the train tracks and truck traffic. There is a way to make this work well with significant barriers and separated signal cycles, but the city can’t cut corners on the intersection designs. If it isn’t easy and safe, people will invent their own routes.

So I say we put an asterisk on this option. It will only work with strong design and bike-friendly signal timing. But designed well, it could be a fantastic solution.

Option 3 – ‘Wide,’ multi-use trail on the west side 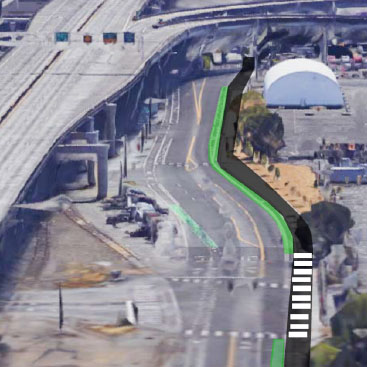 This option would essentially connect the Alaskan Way Trail and the Alki Trail into one long trail (and when the waterfront rebuild is complete, this trail would also connect to the Elliott Bay Trail, which could soon connect to the Ship Canal Trail, which connects to the Westlake Bikeway and the Fremont Bridge and the Burke-Gilman Trail and wow this network thing could finally be coming together).

The trail option is definitely the most intuitive at both Atlantic and Spokane. It also avoids crossing intersections and would have the fewest traffic signals, so it would probably be the fastest route for people biking.

However, this option would cross every Port driveway. Many hours, this is not a big deal since the driveways are closed or have very little activity. But when they are busy, they are busy.

Basically, of the options presented, this is the one to beat.

There may be space for a hybrid option that is both intuitive at the Spokane intersection and avoids the Port driveways on the west side of the street. Don Brubeck from West Seattle Bike Connections and a member of the Seattle Bicycle Advisory Board put it this way in his comment letter:

A hybrid option of multi-use path on west side from S Spokane to S Hanford, making S Hanford an efficient protected intersection with bike and vehicle sensors, and then two-way protected bike lane on east side to S Atlantic St. with concrete barriers.  It would give the Port terminals more safety, efficiency and location flexibility for their gates, and avoid the most intersection and driveway crossings.

This option is highly reliant on good design and responsive signal times, but it could be a great solution for all parties if done right. Again, that’s a big “if.”

It solves the initial problem of connecting to the Alki Trail at Spokane by creating a no-wait turn along the west side of the street all the way to Hanford. This stretch avoids any conflicts under the Spokane Street Viaduct and doesn’t cross any driveways. For people biking, this is the fastest and most direct route.

Hanford is the trickiest part. It’s the first driveway and an intersection with many turning trucks. The city would need to find a way to get two-way bike traffic from the southwest corner of the intersection to the northeast corner in a safe, predictable and comfortable way. This is possible, but the whole option falls apart if the design of this intersection is not superb.

This option would also need to address the intersection at Atlantic as discussed above in Option 2. I think there’s a good way to do it, but it must be done well or, again, the whole option falls apart. 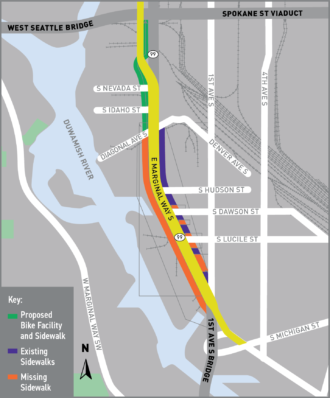 The E Marginal project is also looking to make some changes to the much busier segment south of the Spokane Street Viaduct and through Georgetown.

At a minimum, the city wants to build a trail connection from the Alki Trail to Diagonal Ave S, which would get people walking and biking through a tricky and confusing stretch of freeway ramps and semi truck parking. This is great news.

But we can do better. This project should include a connection all the way to the 1st Ave Bridge, which already has a quality biking and walking facility and connects to the southern section of the Duwamish Trail into the heart of South Park. The Seattle Bicycle Master Plan calls for a multi-use trail on E Marginal between these bridges, and that’s exactly what we should be trying to build in this project.

Snapshot of the area from the 2017 King County Regional Trails map. UPDATE: I made it a GIF to show one way to complete the regional connection.

A complete connection to the Alki Trail and the remade E Marginal bike route would create a significant shortcut to downtown Seattle for people in Georgetown, South Park and south King County. It would bring Seattle’s separated bike network tantalizingly close to the Green River Trail (and, therefore, the Interurban Trail) just south of South Park and the Seattle city limits. Such a connection would activate big sections of south King County. It would provide many more communities with safe biking and walking access to Seattle, including Allentown and other parts of Tukwila, Southcenter, Kent and Auburn.

Unfortunately, a complete biking and walking connection between Spokane and the 1st ave Bridge is not being considered currently. And as a state highway, making changes to this stretch requires more collaboration and more bureaucracy.

But a safe connection could have an immense regional impact and would serve many communities without easy and safe access to healthy transportation options like walking and biking today.

This is a great opportunity for a regional leader to step up and push for a complete link to Georgetown, South Park and the Green River Trail. We are so close, let’s just complete the connection now all at once. It’s the right thing to do, and it would provide a healthy transportation option for growing communities that are otherwise dependent on buses and driving on increasingly congested roads and highways.