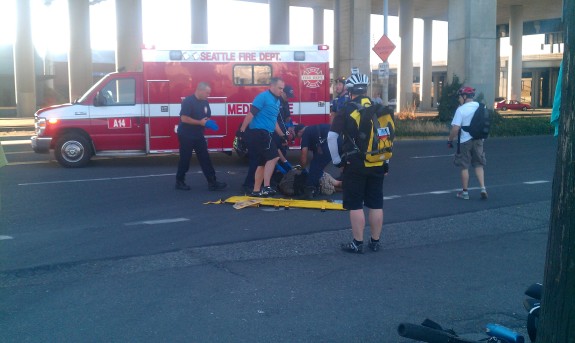 One person lost consciousness for a period of time, but was conscious as medics loaded him into the ambulance.

It is not immediately clear how the collision occurred, and police are investigating. However, a reader who arrived shortly afterwards sent the photo above and had this to say about it:

It was a bike southbound running into a bunch of bikes northbound (probably because the bridge had opened/closed a few minutes earlier).  Several of the guy’s front bike spokes were broken ( I’m assuming that was his bike).  He was wearing a helmet.  He seemed relatively OK (conscious) as they placed a head brace on him and placed him on the stretcher.

Bike on bike accident was bound to happen in this area.  It is a free for all in the mornings when bikers are trying to cross EMW.  Please help speed the plan to fix this mess and prevent something like this happening again.

We wish him a speedy recovery.

While it is not totally clear what happened in this collision, the area is a known problem area, and the city, neighborhood leaders and freight groups see improved paving and a two-way protected bikeway as the likely best solution. However, the project is now searching for a new funding source after the state legislature failed to pass a transportation package. We have asked the city for an update on the project and will update when we learn more.

We will also update when we learn more about the collision. West Seattle Blog is also on the story.

Founder and Editor of Seattle Bike Blog.
View all posts by Tom Fucoloro →
This entry was posted in news and tagged injuries, marginal way, west seattle. Bookmark the permalink.

37 Responses to Man injured while biking on E Marginal Way