Wanna lead the largest statewide bike organization in the country? 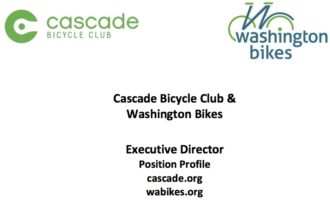 Five months after Elizabeth Kiker announced her resignation, Cascade Bicycle Club and Washington Bikes have released the job listing for the joint organization’s next Executive Director.

The new ED will oversee 40 staff members (including, full disclosure, my incredible spouse Kelli) and a $5.6 million budget, according to the extended job listing (PDF). The organization also claims more than 17,000 members. Compared to other bike organizations in the country, Cascade and WA Bikes are in a league of their own.

The position will be open until filled. More details from Cascade/WA Bikes:

Cascade Bicycle Club and Washington Bikes seek a bold, creative, experienced and visionary leader to serve as the next Executive Director. The next Executive Director will lead these dynamic, well-established and respected organizations by demonstrating  a passion for growing and expanding our influence and impact in pursuing Cascade’s mission of ‘Improving Lives Through Bicycling’ and Washington Bikes’ mission of ‘People Who Bike Make a Difference.’

The next Executive Director of Cascade & WA Bikes will have an opportunity to take the helm of a vibrant, growing and respected organization and build a lasting legacy for Washington state. The E.D. of both 501(c)3 Cascade Bicycle Club and 501(c)4 Washington Bikes will be the torchbearer; setting out immediately to build trust while creating a culture of “best practices” and embodying the values already set forth by the missions of the organizations. We are seeking the consummate manager of managers who is as comfortable in the budgeting process as they are working with key partners, political stakeholders and major donors.

The Cascade Bicycle Club & Washington Bikes Executive Director will have overall strategic and operational responsibility for fulfillment of Cascade’s mission to improve lives through bicycling, teaching the joys of bicycling, advocating for safe places to ride and producing world-class rides. The Executive Director also oversees WA Bikes’ 5-year strategic plan with a mission of being the statewide voice for people of all ages and abilities who ride bicycles for transportation, health, travel and recreation. WA Bikes works to elect, build relationships with, and hold accountable policymakers to improve the safety and accessibility of bicycling throughout Washington state thereby improving the health and prosperity of our communities.

Cover letter and resumes should be submitted via email to Adam Forest ([email protected]). This announcement was originally posted on April 20, 2017. The position will remain open until filled. Applications reviewed on a frequent rolling basis.

Founder and Editor of Seattle Bike Blog.
View all posts by Tom Fucoloro →
This entry was posted in news and tagged cascade bicycle club, washington bikes. Bookmark the permalink.

1 Response to Wanna lead the largest statewide bike organization in the country?