Work to combine Cascade Bicycle Club and Washington Bikes is still on track and moving forward, according to a WA Bikes update.

We reported on the proposed merger back in August, and both organizations’ boards have since adopted a nonbinding resolution to negotiate a merger plan. The WA Bikes Board plans to vote on the plan December 8. Cascade members will have a chance to vote on bylaw changes in December (UPDATE: Cascade’s ED Elizabeth Kiker says the bylaw changes will be voted on in December, they are not needed to approve the merger.). 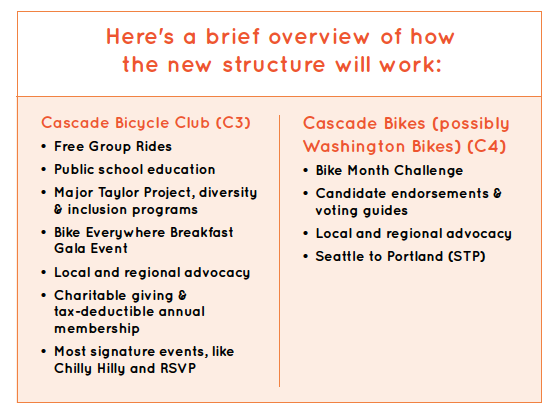 Though Cascade Executive Director Elizabeth Kiker and WA Bikes ED Barb Chamberlain stressed that “This isn’t a takeover or an acquisition,” as Kiker put it, Cascade is the much larger entity with about seven times the staff of WA Bikes. WA Bikes will also be closing its storefront office in Pioneer Square (though some more fun bike stuff may be filling that space, stay tuned…).

The new Board of Directors will have members from the WA Bikes Board, and the new board will “reflect statewide representation and a diversity of biking interests,” according to the WA Bikes blog post. Kiker would remain the ED of the merged organization, Chamberlain would stay on staff and WA Bikes State Policy Director Blake Trask would lead the new organization’s advocacy department.

The WA Bikes name (or the mixed name Cascade Bikes) will transform into the name for the 501(c)(4) politically-engaged advocacy wing of the organization (Disclosure: My partner Kelli works in Seattle advocacy for Cascade). That department will need to focus in Seattle, around the region and across the entire state. Cascade Bicycle Club will be the name of the 501(c)(3) tax-deductible wing, focused on education, Safe Routes to School and other non-political advocacy work.

Cascade is already a regional bike advocacy organization of unprecedented size in the nation. So they are charting new territory as they grow and change.

And the changes follow what may be the organization’s best ever election victory. Not only did Cascade play a central role in the campaign to pass Move Seattle, an unprecedented funding package for safe streets, but all of the organization’s endorsed City Council candidates currently hold leads in their races (even if Lisa Herbold pulls off a win against the Cascade-endorsed Shannon Braddock in the toss-up District 1 race, Cascade will have gone 7 for 8. And Herbold isn’t an anti-bike candidate, so that wouldn’t be a big loss. Cascade also endorsed Bruce Harrell in District 2, whose minuscule 424-vote lead over challenger Tammy Morales may be too much to overcome with so few votes left to count. Morales also is not anti-bike, so an unlikely loss there wouldn’t be a big deal for Cascade, either.).

And to think some Cascade leaders wanted to ditch political advocacy! The fact that members and politically-wise Cascade leaders got active earlier this year and fought to preserve that part of the organization is already paying off big time. Because now that Seattle has funding, it’s going to take political leadership to make sure it is invested wisely and boldly.

Here’s the update from WA Bikes:

Talks continue on the proposed merger between Washington Bikes and Cascade Bicycle Club, which would create the nation’s largest statewide bike advocacy organization.

Following work by a joint subcommittee, in late October both boards adopted a nonbinding resolution laying out the guiding principles for the negotiations.

The Guiding Principles Resolution lays out the strengths both organizations bring and a commitment to:

Following the merger, the name “Washington Bikes” would serve as the name for the 501(c)(4) entity, with “Cascade Bicycle Club” the 501(c)(3). Some members of the current Washington Bikes board of directors would be appointed to the Cascade board, which will then appoint the board of the (c)(4). Both boards would reflect statewide representation and a diversity of biking interests.

The merger discussions are now in a due diligence phase leading up to a board vote scheduled for December 8. During due diligence, the organizations share financial and programmatic information needed for a full understanding of what a merger would entail and the opportunities and risks it presents.

Details of the merger and transition plans are being developed by a joint board committee working with staff and will be presented to both boards before the vote. A strategic planning process in early 2016 would serve to lay out more detailed long-range plans.

To comment on the merger or ask questions, email [email protected]. Emails to this address are shared with both boards.