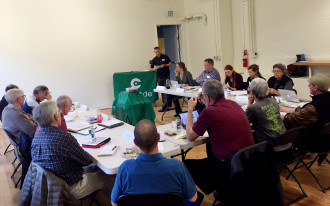 The Cascade Bicycle Club Board voted Wednesday to maintain both its 501(c)(3) and 501(c)(4) organizations.

This means the club will not abandon its ability to endorse political candidates and help work with candidates’ campaigns for office.

We have reported several times on this debate within the club, which is not only the region’s largest bicycle advocacy organization, but one of the largest bike organizations in the country.

The club’s board had been considering an organizational change that would consolidate into one 501(c)(3) charity organization, which would be prohibited from direct political election advocacy. This could have made some organizational headaches go away.

But the change raised concerns that the club was moving away from advocacy and would reduce its power as an organization by removing the ability to elect bike-friendly leaders. With the coming district elections system for Seattle City Council and with the spreading interest in better bicycling and safer streets in smaller communities around the region, the ability to organize on the ground for elected officials will only get more powerful.

An anonymous group called Save Cascade formed and started gathering signatures online for a petition demanding the club maintain its political work.  As of press time, the petition had 275 signatures. The group also outlined a path to recall board members if they chose to eliminate the 501(c)(4), an action the club’s membership has taken in the past.

The Board voted 9 – 2 to maintain both organizations and to form a task force to recommend ways a “hybrid” structure could grow in influence and stay in legal compliance with rules governing charity organizations (if you’re confused by all this, don’t worry. You’re not alone). The task force will report back in late summer. Any changes that require a change in the club’s bylaws would also need a vote of the membership.

So the issue isn’t completely, totally dead. The extent of their political force could still be decided by the task force, and there were clearly members of the Board who don’t like the idea of Cascade doing endorsements at all. But it seems there is little will on the Board anymore to completely squash the club’s political work.

In an early show of this political intentions, the club’s Board voted to endorse Rob Johnson over longtime Councilmember Jean Godden in Seattle’s 4th District.

Founder and Editor of Seattle Bike Blog.
View all posts by Tom Fucoloro →
This entry was posted in news and tagged 501(c)(3), 501(c)(4), cascade bicycle club. Bookmark the permalink.

10 Responses to Cascade Bicycle Club will not ditch political advocacy