Will Cascade ditch election advocacy? Members and the Board will decide this month

Cascade Bicycle Club members will gather twice in the next week to discuss a proposal from the Board of Directors to end direct candidate election advocacy.

As we have reported previously, the club is considering moving to a non-profit charity model, which prohibits them from directly funding or assisting political candidates (Full disclosure: My fiancé Kelli works for Cascade’s Advocacy Department).

Some members even started a Save Cascade petition to lobby the Board against making this change and to organize other concerned members. As of press time, the petition had 155 signatures. Former Cascade Executive Director Chuck Ayers (who had some high-profile clashes with the Board at the end of his time) was among the first signers.

There are two member meetings in the next week to discuss the changes, the first of which is today:

The Board will vote on the issue at their March 18 meeting (despite reports in the Stranger that the vote will be delayed until late 2015, Cascade Executive Director Elizabeth Kiker said there will be a vote on March 18).

The Save Cascade petition calls for the following:

We petition you to:

So would the change mark the end of Cascade Bicycle Club’s advocacy? No.

But at a time when bike advocacy is gaining traction all around the region and Seattle moves to a district-based City Council election system, direct, on-the-ground election work has the potential to be a powerful way to impact regional governments. If knocking on doors becomes as powerful (or more powerful) than political elites writing big checks, Cascade and its engaged volunteers could have a lot of influence in the process in Seattle, in city halls around the region and in Olympia.

Why, then, is the Board planning to ditch the 501(c)4? That depends who you ask.

The Save Cascade petition alleges that “a few Cascade board members want to turn the organization into a group that simply provides a tax benefit for riding a bike.” There are also some disagreements among Board members about whether the club should be endorsing candidates at all (several abstain from voting on endorsements for this reason).

But, it’s not entirely that simple. The change itself is drenched in wonky legalese, so bear with me.

The biggest arm of the club is currently a 501(c)4 non-profit. Donations are not tax-deductible, but the organization can endorse candidates and even help organize people to work on their campaigns. The club also operates Bike PAC, a political action committee that can raise funds to spend directly on electoral campaigns. Memberships and most of the major events and rides go through this part of the club.

A smaller part of the club is a 501(c)3 charity, called the Cascade Bicycle Club Education Foundation. This is operated and funded separately from the 501(c)4 organization, but donations are tax-deductible. This part of the club mostly operates their education programs, encouragement programs like Bike Month and great community-building programs like the Major Taylor Project. It also handles a lot of advocacy work (though not on elections).

To give you a specific idea of what the different arms do, the club’s 2013 annual report outlines the following as expenditures for the 501(c)4: 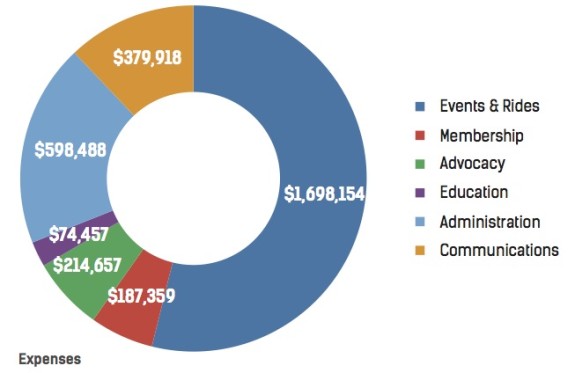 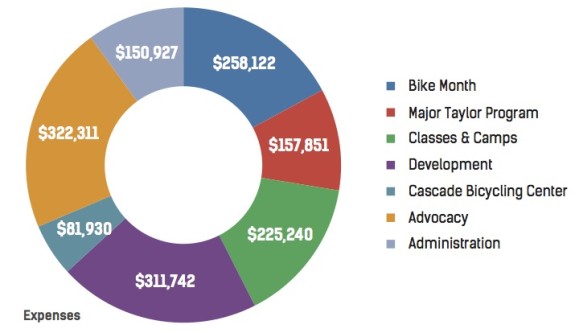 As you can see, there’s already overlap in what each organization does. Each pie has advocacy and education slices, for example. This creates some messy organizational problems. The Board is tasked with ensuring the structure keeps staff time, assets and finances separate between the two organizations.

There’s also a ton of work currently done by the 501(c)4 that could be done by the 501(c)3. The free daily rides program, many of the big recreational rides, a lot of the non-electoral advocacy and education work, etc. In fact, most of what Cascade does could be done under a 501(c)3 structure, including general bike advocacy work and even ballot initiative campaign work. This is a big reason why the Board is currently considering moving the entire club into one charity organization: It’s simpler and more tax-deductible.

But it also cuts off the club’s ability to ever do direct election work again, at least not without the significant hurdle of reforming a 501(c)4 and PAC.

The Board has a compromise option available. At their March 18 meeting, they will also weigh an option that maintains both the 501(c)4 and 501(c)3 structures, but more clearly defines and separates the two organizations and maybe moves more qualifying resources and programs over to the charity arm of the club.

13 Responses to Will Cascade ditch election advocacy? Members and the Board will decide this month