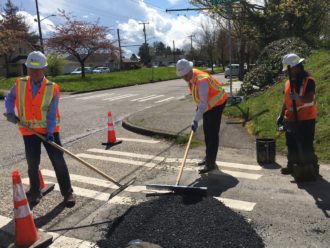 If there is a persistent pothole that you find yourself swearing at every singe day, well, this is your chance to get it fixed.

SDOT has launched a renewed campaign to get people to report potholes so crews can go fix them. Reporting potholes really does work, so long as you’re reporting isolated potholes and not, like, a whole block of bad pavement.

The easiest way is to download the city’s Find It Fix It app. If you pull over next to the pothole, the app will geolocate for you. You can even add a photo if you want. There’s also this web form and good old-fashioned phone calling: 206-386-1218.

It is very easy, and the response time from road crews may surprise you (it’s not uncommon for the problem to be fixed within a couple days).

The long and cold winter did more damage to roads than the average winter, SDOT says, so they need people’s help locating issues. It’s much cheaper and more effective to get crowd-sourced data. And, of course, everyone loves when the city fills potholes! It’s the perfect transportation campaign for an election year.

But hey, if the city’s gonna fill a bunch of potholes, let’s make sure to report all the potholes in bike lanes across the city. Give yourself a couple extra minutes on your ride so you can pull over and file a report. Everyone else who bikes that way will owe you one.

This week, the City of Seattle kicked off Pothole Palooza, a campaign to aggressively patch potholes across the city during the spring season. The Seattle Department of Transportation (SDOT) is receiving much help from the community reporting potholes and our Pothole Rangers are using that information to map out a strategy as they move through the city.

Winter was longer, colder, and more rainy than usual which means residents are seeing a lot of potholes on our streets,” said Mayor Murray. “We are going street by street, neighborhood by neighborhood, to fix potholes and make our streets safer for everyone—no matter where you live in Seattle.”

During the campaign, SDOT crews will be assigned to specific districts around the city. Crews from the Seattle Parks Department will also help with this response.

“We recognize that residents have been patient through a tough winter that’s resulted in an increased number of potholes and we want them to know that we’re listening when they report them,” said SDOT Director Scott Kubly. “You’ve told us where they are, and we are marshaling our resources to fill them.”

Seattle has had an extremely wet and cold 2016-2017 winter season. Residents can expect to see more potholes in the winter and spring, following periods of cold temperatures and rain or snow. February and March are when we see the highest numbers of potholes. This past February was the wettest we have experienced in thirty years.

15 Responses to SDOT really, really wants you to report potholes