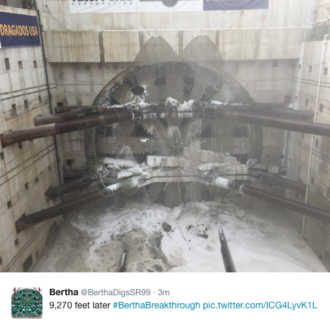 Seattle Bike Blog has been opposed to the downtown car tunnel since this site started in 2010, and we still are. It’s an enormous investment in unsustainable transportation that will likely make downtown and South Lake Union traffic worse. It’s a massive greenhouse gas generator with very little utility for transit and no utility for walking and biking. It’s the exact opposite of how we should be investing in our downtown and our region.

That said, credit where it’s due: I didn’t think they’d make it.

Yes, it is years late (the tunnel should have opened to traffic in 2015, according to the schedule when it broke ground) and has racked up big cost overruns (the total is still uncertain, but Seattle Tunnel Partners has filed a $480 million claim and WSDOT has already noted a $149 overrun of its own). But even a dedicated tunnel opponent like me can note that the engineers and crews on the ground have accomplished something that is at least remarkable from a technical standpoint.

So, congratulations to the team. Take a victory lap. You earned it. Whether I like the project or not, today is historic.

The failures of this project were political, and the failures include the opposition who did not built a strong enough vision and coalition to compete with the tunnel. The tunnel was political magical thinking where everyone supposedly wins: “We’ll just bury the traffic!”

But that’s not how traffic works. This project will certainly change where and how the traffic problems occur, but it doesn’t provide a way for people to get where they’re going without a car. Traffic is too many people driving.

So politicians who supported it, you’re not off the hook. That includes Mayor Ed Murray, who was a major booster of the tunnel in the state legislature.

We need to make sure the traffic from the tunnel portals do not destroy transit reliability, bikeability and street safety in South Lake Union, Lower Queen Anne and Sodo. Unfortunately, mitigation of harm is the best we can hope for now that the tunnel looks like it will actually happen.

We also need to continue fighting for a waterfront that prioritizes city life over the movement of traffic. The surface highway on top of the tunnel highway looks like it’s still on track to go through, but I haven’t given up hope that strong leadership can shake up those plans and make sure the people get the waterfront we were promised.

The highway era in Seattle is far from over. We keep digging deeper into that car-dependency hole. This car tunnel is not a gift to future generations, it is a disaster.