Tuttle: ‘Our duty is to protect the vulnerable’ 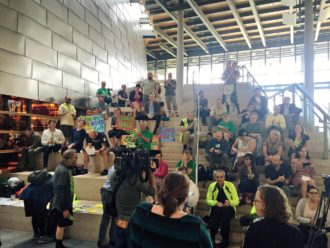 Cathy Tuttle addresses a crowd gathered in May to urge city leaders to treat traffic violence like the public health emergency it is.

So what does this mean for the popular movement for safer streets in Seattle, throughout Washington, across the nation and around the globe?

For my part as the journalist behind this blog, I am going to talk to as many people as I can about this question. So expect more going forward. If you know someone I should speak with or have read something I should read, let us all know in the comments below or email me directly at [email protected].

Today, Seattle Neighborhood Greenways Executive Director Cathy Tuttle posted some principles she hopes her coalition of neighborhood safe streets groups will get behind. She stresses that these words are hers (she can’t speak for the whole coalition of groups under the SNG umbrella), but they are a starting point.

In light of the uprising sweeping across our city and our nation, the stand we take as an organization, and as a coalition of people, matters very much.

First, our duty is to protect the vulnerable. We resolve to support people of color, children, the elderly, the other-abled, and the people who cannot afford to travel by means other than on foot or by bike. We will continue to do what we can to ensure their safety comes first.

Second, we will support grassroots planning and organization. Our coalition members are located throughout Seattle, from Lake City to Rainier Beach. We will be stronger allies to organizations that defend basic human needs and freedom. We will ally with those groups that give neighbors a chance to meet others in positive, constructive gatherings.

Third, we will support Seattle as a sanctuary city. We are proud to support Mayor Murray, who has declared Seattle one of America’s 300 sanctuary cities to shield undocumented immigrants from the threat of deportation. Because of his stand, Seattle and the region stand to lose billions of federal dollars annually for infrastructure and other essential municipal services. We will be supporting our elected leaders who resist the overwhelming temptation to enable spending on big-ticket projects. Our crumbling streets can be rebuilt later, our humanity cannot. In Seattle, we can draw on internal resources. We must welcome new people, and we have no choice but to do the right thing until we have democratically removed an administration founded on hatred.

Finally, we will celebrate our successes. Seattle Neighborhood Greenways just purchased 200 yards of green ribbon and ceremonial scissors. We’ll be there whenever one of our local coalition members opens a new crosswalk, festival street, Playstreet, or puts up a new stop sign. One of our active community members has taken to delivering flower bulbs by cargo bike, “because I know we’ll need to see some hope in the spring.”
Always find ways to celebrate.

This entry was posted in news and tagged cathy tuttle, seattle neighborhood greenways. Bookmark the permalink.

3 Responses to Tuttle: ‘Our duty is to protect the vulnerable’