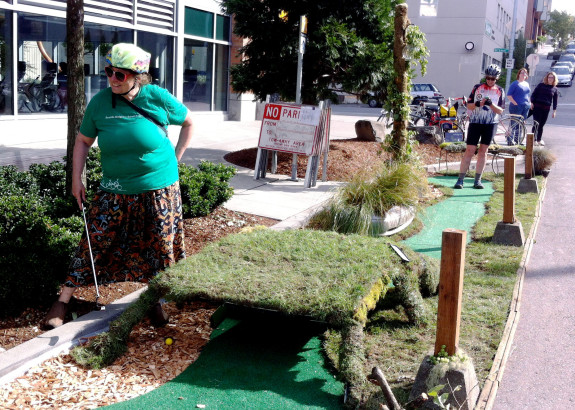 The National Highway Traffic Safety Administration (NHTSA) will recognize Seattle Neighborhood Greenways Director Cathy Tuttle with a Lifesavers Public Service Award. Yep, the Feds have noticed the work of this humble grassroots safe streets organization, organizing neighborhood-by-neighborhood to develop bike routes and safe streets that everyone can feel safe using regardless of age or ability.

“[This award] reflects the fact that not only are the changes we’re seeing on the West Coast happening at a higher rate, but it’s a national priority as well,” said Tuttle. She will receive the award along with Greg Raisman, who works on safe streets and neighborhood greenways at the Portland Bureau of Transportation.

Tuttle points to work at the Federal level to shift traffic engineering standards to embrace safer multimodal design and USDOT’s Safer People Safer Streets challenge as signs that grassroots work in cities like Seattle and Portland are starting to align with a national “cultural shift” away from just safer high-speed roadways to safer streets for everyone.

“NHTSA has long been concerned with keeping people safe on high speed, high capacity roads by engineering safer highways and demanding safer vehicles (the organization grew out of Ralph Nader’s work in the 1970s),” Tuttle said. “Engineers were put on this earth to solve problems. Through NHTSA-funded programs, they’ve done a terrific job at making safer highways and cars. NHTSA may be setting engineers a new range of problems to solve.”

For our nation’s sake, I hope she’s right and this cultural shift has legs. Because the Feds work in dollar amounts unfathomable to even wealthy cities like Seattle (our nine-year Move Seattle levy would be a rounding error in the Federal transportation budget). Just a little piece of this funding directed towards safe streets would change everything. If the Feds went all-in on safe streets, it’s hard to overstate the potential to create healthier, better connected and more sustainable communities all across the country.

More details on the award from SNG:

Honored to receive an important award from the National Highway Traffic Safety Administration (NHTSA). We were chosen as the national recipient of the Lifesavers Public Service Award in partnership w Greg Raisman of Portland Bureau of Transportation for our work on Neighborhood Greenways and safer streets ‪#‎VisionZero‬

SNG recently received the Transportation Team Award from Seattle Department of Transportation (SDOT) for a team of citizens that who help to advance SDOT’s mission, vision, and goals: http://seattlegreenways.org/…/greenways-receives-major-sdo…/

SDOT credits SNG with changing, and improving, the way Seattle Department of Transportation works with community partners in doing outreach and public engagement.