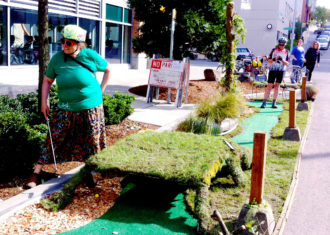 Cathy Tuttle founded something very special when she started Seattle Neighborhood Greenways, the volunteer-empowering, community-centered safe streets organization she has led as Executive Director since its beginning in 2011.

Tuttle is retiring, and the organization is hiring multiple staffers to try to fill her shoes under the leadership of new ED Gordon Padelford (as Padelford put it, “I am a mere mortal, unlike Cathy.”). You can grab some beers with Tuttle and the new SNG staff 4– 8 p.m. Sunday at Peddler Brewing. $1 for each beer will go to SNG.

Tuttle wrote a farewell letter to supporters on the SNG blog. Here it is in full:

It has been my great pleasure getting to know you.

You are people all over Seattle doing your part to reclaim streets as public space.

You are the parents walking to school with your children in Lake City along streets with no sidewalks. You are the tech workers who suffer daily terrifying near misses on your bike to work. You are the families celebrating Play Streets in Queen Anne. You are Rainier Valley family bikers negotiating a car-free life. You are neighbors who are trying to figure out how to travel safely on foot and by bike between South Park and Georgetown. You are families mourning the death of a loved one from traffic violence. You are the teams painting streets in Ballard on PARKing Day. You are older adults who long for a nice place to sit outside on slower, safer streets where people driving stop as you cross the street.

You are part of a citywide movement — and Seattle in turn is part of a global movement — of people who share a vision of streets as essential public places for people.

As the founding Executive Director of Seattle Neighborhood Greenways (SNG), I’ve worked full time and tirelessly for the past six years, listening to your stories, uniting our coalitions, and amplifying our voices.

In the past six years as ED, my work has been to direct the conversation, and I’ve seen our streets transformed. More people are walking and biking along protected bike lanes and greenways, parklets and play streets are opening, safe routes for children to our lowest income schools are prioritized. We’re in a good place. And we have far to go.

I’ve worked side by side for the past four years with SNG Policy Director Gordon Padelford, a master coalition builder. I’m delighted he is taking over as ED of SNG. His focused advocacy has helped to put Seattle on the map as a 20 MPH Vision Zero city, and his work has directed millions of dollars into Safe Routes to School, true multi-modal corridors, road rechannelizations, sidewalks, protected bike lanes, better traffic signals, safer routes to transit, Play Streets, tactical urbanism, and much more.

As we continue on our journey dedicated to reclaiming contested public space for people, I am asking you to keep caring and to keep showing up.

Please support the work of Gordon and his team of professional advocates (welcome to the SNG team Susan Gleason!). Support your neighborhood’s on-the-ground greenway group. Keep demanding safe, healthy streets for people of all ages, all abilities, and all incomes.

Thirty percent or more of land in most every city is primarily dedicated to moving and storing cars. I am leaving on a series of extended stays in cities around the world that are working out the details of how to transform their streets into public spaces for people. First stop, Berlin.

We are at a tipping point in the transformation of Seattle into a walkable city. We are witnesses of and advocates for the movement towards a bike-friendly city. We are transforming our streets into public places where people can sit, meet, talk, and play.

With your help, Seattle can become a growing city where streets support people’s lives as they move around, meet new people, raise a family, and grow old. A city I look forward to visiting. Keep going strong my friends.