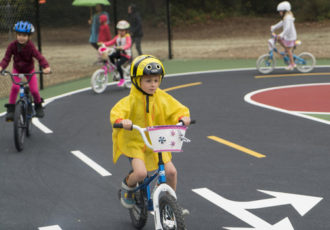 I can’t begin to tell you how much I would have loved White Center’s newest playground, which opened over the weekend. The new Bike Playground at Dick Thurnau Park (Google Maps still calls it by its old name “Lakewood Park”) is painted like a real street network, but kid-sized. So you hop on your bike and ride around encountering turn lanes, stop signs, crosswalks and so on just like the ones you would see from the sidewalk, the bus, the back of your parent’s bike or from the passenger seat of the family car.

But beyond just being fun, the playground (sometimes referred to as a “traffic garden”) can also teach kids how to bike on public streets safely. They can learn what all the lines and signs on the streets mean and get comfortable navigating them all in a car-free space. Schools in the area can also use the park for physical education courses. And perhaps parents will have more peace of mind when their kids hop on their bikes and pedal off to a friend’s house knowing their child has practiced the rules of the road.

As we reported last year, the project came about from community conversations between the Yes! Foundation and Cascade Bicycle Club’s Major Taylor Project. It’s about activating an underutilized tennis court and creating a community gathering spot as much as it is about bikes. The organizations won a King County Parks grant to help fund the project. The design was created by Alta Planning + Design, a firm that also designs grown-up streets.

UPDATE: Here’s a look at the full design, from Alta. I was wrong earlier, much like most the streets in White Center, there are no bike lanes: 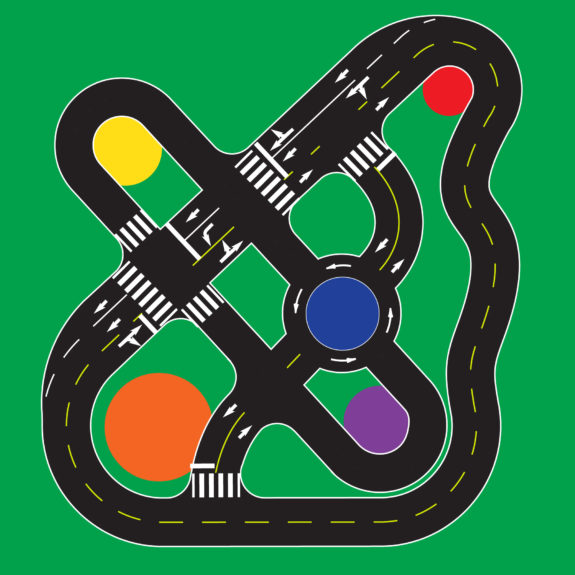 Here’s a video of the playground in action, via Alta’s Steve Durrant:

If you’re in the north end and are looking for a traffic garden closer to home, Cascade just opened a smaller one behind their Magnuson Park office:

More on the new playground from King County Parks:

With the completion of the White Center Bike Playground at Dick Thurnau Memorial Park through a partnership between King County Parks and the Cascade Bicycle Club, bike riders of all ages now have a safe place to hone their skills.

Dedicated on Oct. 1, the bike playground features a small-scale, closed course streetscape, complete with realistic lane markings and signage. The first of its kind in Washington state, it teaches cyclists of all ages rules about bicycle, pedestrian and traffic safety in a safe, comfortable setting.

The White Center Bike Playground was made possible through the King County Youth Sports Facilities Grant program, along with program planning and design support from Alta Planning + Design, the YES! Foundation, and the White Center Community Development Association (CDA).

“After more than a year in the making, we’re so excited to finally see this space come to life — and we owe it all to our amazing community partners for their tireless support,” said Cascade Executive Director Elizabeth Kiker. “King County Parks’ generosity in granting us this space and funding, along with the guidance of the YES! Foundation and White Center CDA, made for one of the most exciting and successful partnerships we’ve ever had.”

“The partnership between King County and Cascade Bicycle Club to create this unique park feature is a perfect example of how our grant program works best,” said King County Parks Director Kevin Brown.

In the coming year, Cascade will use the new playground to offer bicycle camps, field trips, community riding events and more. Also available are bikes and helmets for use in future Cascade and school partner programming.