New 2.5-mile section of EasTrail now open between Renton and I-90 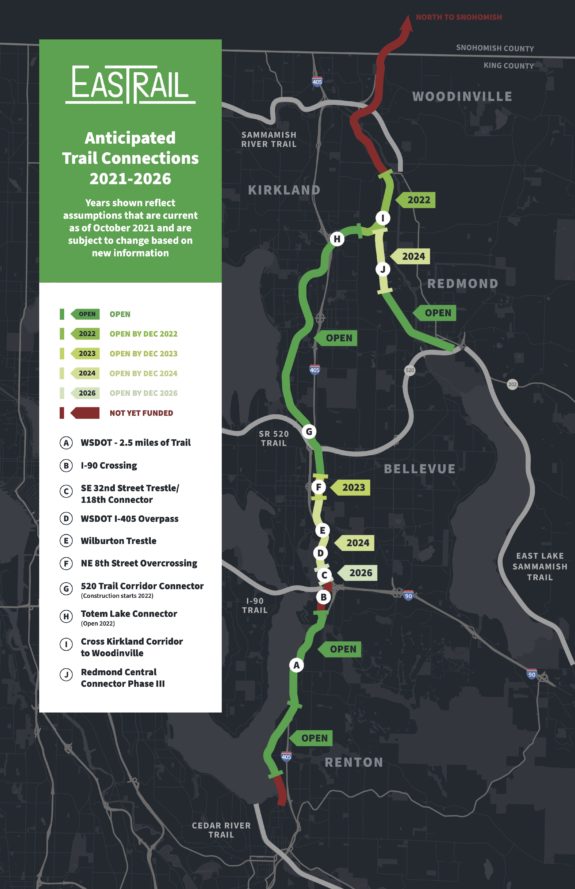 Segment A is now open.

A 2.5-mile segment of the EasTrail is now open between the Seahawks training facility in Renton and Coal Creek Parkway in Bellevue. The very wide trail replaces the old Lake Washington Loop Trail, which is being swallowed up by the state’s $705 million I-405 freeway expansion project.

This significant segment of the trail keeps the full visionary project on track for a major series of openings in 2023 and 2024, connecting Eastside communities and East Link light rail stations in a way that is almost unimaginable today. This trail and light rail will revolutionize non-driving transportation on the Eastside. It will rival the Burke-Gilman Trail, especially if the neighborhood connections are designed well.

The paved portion of the new trail is 12 feet wide with additional gravel paths on both sides. The newly completed section meets up with the existing trail connection to Gene Coulon Memorial Park in Renton, though people biking will continue using Lake Washington Boulevard to connect to the trail (unless you want to walk your bike through the park).

The 20-foot-wide trail – featuring a 12-foot center path and wide gravel shoulders — allows for distance between walkers, runners, and cyclists and provides people who have limited mobility more opportunities to safely enjoy the outdoors. It is the newest segment of the emerging Eastrail, which will offer 42 miles of uninterrupted trail from Renton to Snohomish County with a spur to Redmond.

“The newest segment of Eastrail offers scenic, safe, and healthy connections to waterfront parks and major job centers along Lake Washington,” said King County Executive Dow Constantine. “Thanks to our partners at WSDOT and funding generated by the voter-approved King County Parks Levy, we are delivering on our promise to expand, maintain, and enhance our regional trails that connect more people to the best opportunities our spectacular region has to offer.”

“We are excited to open the Eastrail with our project partners King County Parks, the City of Renton and the City of Bellevue,” said WSDOT Deputy Secretary Amy Scarton. “This is an important milestone in the delivery of the I-405/Renton to Bellevue Widening and Express Toll Lanes Project. Eastrail contributes to the I-405/SR 167 corridor vision to provide travelers with a safe, sustainable, and integrated multimodal transportation system.

The total project cost $26 million and includes this new trail section and future trail bridge over Interstate 405. WSDOT contributed $14 million as part of its Interstate 405 Renton to Bellevue Widening and Express Toll Lanes project and $5 million through WSDOT local programs. The remaining $7 million was generated by the King County Parks Levy, which voters approved in 2019.

King County Parks is working with partners to expand the trail, connecting it to other regional trails. It is partnering with the City of Renton to extend Eastrail to the south as trail planners evaluate options to eventually connect to the Lake to Sound Trail, which runs through neighborhoods from the south end of Lake Washington in Renton to the Puget Sound shoreline in Des Moines.

To the north, Eastrail will connect to the Mountains to Sound Greenway Trail along Interstate 90 and State Route 520 trail, eventually linking the Eastside with Seattle via integrated regional trails.

Convenient access to the new segment of paved trail

Access to the new segment of Eastrail is easy:

King County Parks manages the 16-plus miles of Eastrail that is owned by King County. The remaining portions of the former railroad corridor are owned and managed by Kirkland, Redmond, Woodinville, Snohomish County, Sound Transit, and Puget Sound Energy.

This entry was posted in news and tagged eastrail, king county parks, wsdot. Bookmark the permalink.

2 Responses to New 2.5-mile section of EasTrail now open between Renton and I-90