In May, the EasTrail will replace the Lake Washington Loop Trail near Coal Creek + Full closure May 4-5

2.5 miles of the Eastrail will be fully paved and opened next month between Ripley Lane N in Renton and Coal Creek Pkwy in Bellevue.

Sections of the EasTrail route between Gene Coulon Park and Coal Creek Pkwy have been opened on and off in recent years as King County works to transform the old Eastside Rail Corridor into a biking and walking trail that could some day rival the Burke-Gilman. Much of the trail will first be opened as a bikeable gravel trail before eventually being paved.

The 2.5-mile section opening in May is funded by WSDOT as mitigation for its massive $705 million I-405 freeway widening project. That widening project will swallow up the old Lake Washington Loop Trail that runs just west of the freeway, so the state is funding completion of the nearby EasTrail to replace it. The paved section will be 12-feet wide with an additional 2 feet of gravel on one side and 6 feet of gravel on the other.

Before it opens, the access point at Coal Creek Pkwy needs to be reconstructed. Thanks to a reader tip, Seattle Bike Blog reached out to the project team to ask about detour plans during the work, which was initially scheduled for ten days in late April. The project’s outreach team initially said there would be no trail access and no detour because “the surrounding area does not offer a safe alternative for bike and pedestrian traffic.” But a few days later, they reached out and said they had reworked the plan and would now only close trail access for two days in the middle of the week: May 4 and 5. From April 26 to May 3, a temporary path will provide access to the old trail. 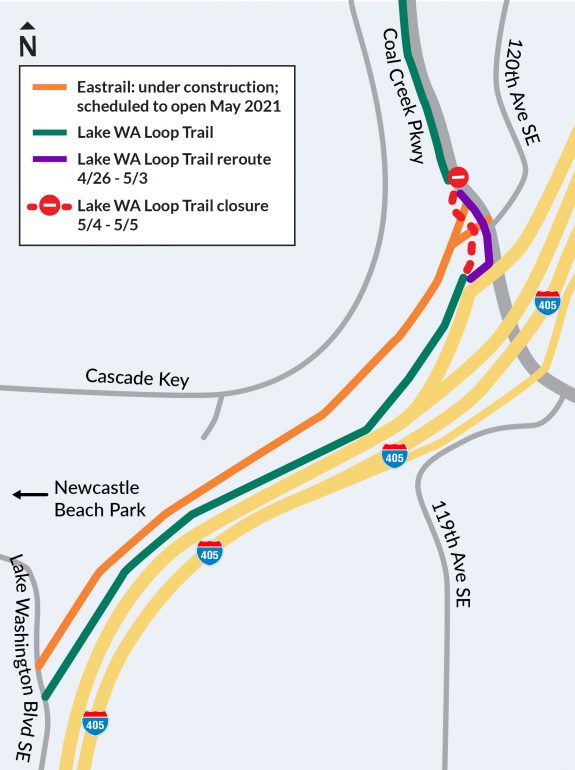 I don’t know if this change is because of Seattle Bike Blog’s question, but it’s welcome news (thanks Nick van den Heuvel!). It’s also a reminder to you all that you can email questions and tips to [email protected]. (UPDATE: Apparently Bellevue’s permit for construction work limited trail closures to 2 days, a fact the project team realized late.)

May 4 and 5 are going to be rough for anyone who relies on this trail connection. From what I can tell, there is no pathway between Newcastle Beach Park and Cascade Key, which would sure be nice. My best guess at a detour is to stay east of I 405 between Coal Creek Pkwy and NE 44th Street. Instead of the trail, take (heading south) 119th Ave SE, SE 60th Street and Lake Washington Blvd, crossing the freeway at NE 44th Street. This route is very far out of the way, adds about 330 feet of climbing, and the bike infrastructure comes and goes along the way. Or you could add some backtracking distance (but cut out some street riding) by crossing I-405 at the Newport Hills Park and Ride. Neither option is comparable to the trail, but they’re something.

Let us know in the comments below if I missed an option or if you have any additional advice.

3 Responses to In May, the EasTrail will replace the Lake Washington Loop Trail near Coal Creek + Full closure May 4-5