With newly-opened section, the Lake to Sound Trail is tantalizingly close to reaching the regional trail network 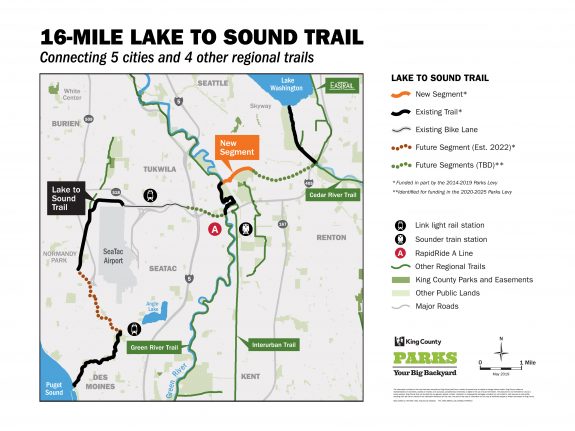 Imagine a new trail connecting Tukwila and Seatac to Renton. This trail would tie together the Green River Trail, Interurban Trail, Cedar River Trail and Eastrail, all while accessing rapid transit service. And someday, it could even reach the airport, Des Moines and Puget Sound.

Well, that trail is one step closer to reality. King County opened another couple miles of the Lake to Sound Trail between Tukwila and Renton. The new section doesn’t look like much on a map, but it included some difficult and important rail and river crossings as well as a connection to the Green River Trail.

Work is set to begin next year on a stretch between Seatac and Des Moines, but there is no current timeline for the major gaps between the new trail and the Cedar River or the Green River Trail to Seatac Airport. You can see on the map just how important this rare east-west link is to reaching much of south King County. Closing these gaps must be a major priority for future parks and trails funding.

“We are strengthening regional trail connections between South King County communities, making it convenient to walk, run, or bike to high-capacity transit,” said Executive Constantine. “By connecting trails to transit, King County is making it easier than ever to explore the best places our dynamic region has to offer without having to sit in traffic or pay for parking.”

Once Lake to Sound Trail and Eastrail are complete, the regional system will connect all the way from Des Moines’ shoreline to King County’s Marymoor Park in Redmond. It also will connect to four of the 10 Sound Transit Link light rail stations that are part of the East Link extension.

The new segment connects the City of Tukwila’s Fort Dent Park to the City of Renton’s Black Riparian Forest via a railroad underpass and a new bridge across the Black River. The $5.8 million project was funded by the voter-approved King County Parks Levy.

It adheres to King County Parks’ regional trail standards with a 12-foot-wide trail, 2-foot-wide surface shoulders, and 1-foot-wide clear zone on each side. It also includes a trail bridge over the Black River, a pedestrian-activated traffic signal at the interaction with Monster Road, native landscaping, and interpretive and wayfinding signs.

Construction of the next segment of the Lake to Sound Trail – connecting Burien and SeaTac to Des Moines – is scheduled to start in 2021.

9 Responses to With newly-opened section, the Lake to Sound Trail is tantalizingly close to reaching the regional trail network