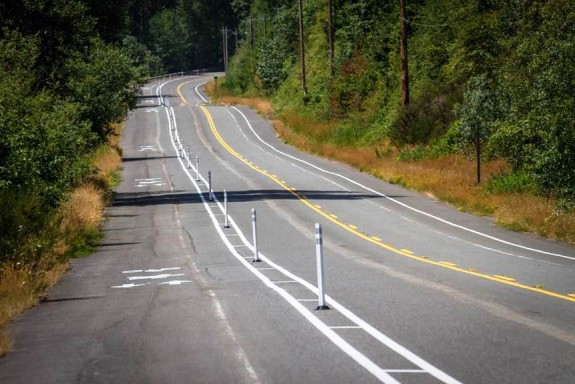 The cycle track, which is the first I can recall in unincorporated King County, runs for 0.7 mile along south side of SE High Point  Way. It’s a two directional cycle track, and is separated from the road by a series of bollards and a double white line.

It’s the second safety feature installed along that stretch of the Mountains-to-Sound Corridor in recent years.

In 2011, the state completed a $4.7 million project to build a 1.2-mile-long gravel trail as an eastward continuation of what used to be called the Issaquah-High Point Trail. It started at the High Point Way parking lot near I-90 and continued east to a point where it connected to High Point Way. It was built to avoid a curvy, hilly section of High Point Way near the parking lot.

There are a handful of county trail alerts this month you should be aware of as the county makes various repairs.

From August 4 – 25, King County will be repairing scour damage around the southern pier and southern bank of Gold Creek, near the Sammamish River Trail at the bridge south of the NE 124th Street and east of the Sammamish River. The trail will remain open but the area near the bridge will be impacted by construction and the presence of heavy machinery.

From August 7 – 13, King County Parks will be repairing portions of the trail along a one-mile stretch of the Soos Creek Trail between SE 240th St to SE 256th St in Kent. The work won’t require a complete closure of the trail, and flaggers will direct trail traffic around active construction zones.

King County Parks will close a short stretch of the Cedar River Trail for one day on August 20 to perform routine maintenance on a bridge near Fred V Habenicht Rotary Park near the intersection of Witte Road SE and SE 221st St in Maple Valley. There will be no detour route.