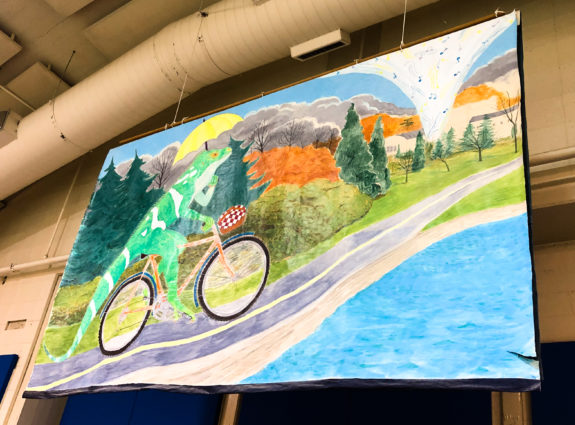 I thought I had seen all Seattle’s bike-themed public art, but I had never been inside the Evan’s Pool in Green Lake Park before this week. While my kid took a swim lesson, I found myself looking at this large hanging mural and thinking, “I’m glad this lizard is not breaking the rules anymore.”

One month ago, people using wheels, including bikes, were allowed once again on the inner path around Green Lake for the first time since early 2020. In response to the pandemic, Seattle Parks instituted a series of somewhat extreme measures that later turned out to be a bit too cautious. Not knowing much at all about how the virus spread, the response made some sense at the time. They banned bikes from the Green Lake path in an effort to reduce crowding, broke up picnics and even closed playgrounds by stringing caution tape between the swings and play structures. But while the picnic and playground bans were lifted before too long, the wheels ban stood for more than two and a half years.

In fact, for nearly two years this lizard was breaking two laws: The wheels ban and the King County helmet law. Now, you’re looking at a free lizard. Well, except that they are biking the wrong way around the lake (only counter-clockwise biking is allowed). But hey, they’re a lizard. Maybe they can’t read.

Founder and Editor of Seattle Bike Blog.
View all posts by Tom Fucoloro →
This entry was posted in news and tagged evans pool, green lake, murals, parks and recreation. Bookmark the permalink.