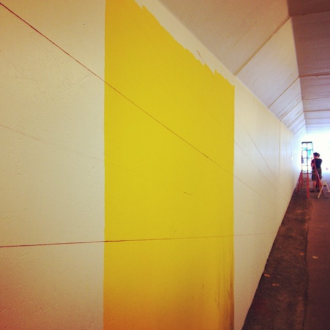 King County Parks has two trail notices in the area this month, one on the Burke-Gilman and one on the Green River Trail.

First, artists and volunteers began painting a mural in the Wayne Tunnel of the Burke-Gilman Trail in Bothell Monday. Work will continue until July 18. The trail will not be closed, but volunteers will be there to direct traffic and will ask people to walk through the short tunnel.

They still need more volunteers, so if you want to help out, sign up for a shift using the 4Culture website.

4Culture and King County Parks have commissioned Seattle-based artist Kristen Ramirez to create a colorful mural along the Burke-Gilman Trail in the Wayne Tunnel, a 250-foot-long passageway under 96th Avenue Northeast in Bothell. The artist will be on site daily from July 7 – July 18, painting the mural with the help of volunteers from 10 am to 2 pm.

Want to get your painting on? We’re looking for volunteers! Click here to see available dates.

The mural was inspired by Ramirez’s research about the trail’s history and through conversations and surveys of area residents and trail users. It is part of a series of improvements to the tunnel that will improve safety and enhance the trail experience.

People using the Green River Trail should be ready for a detour Thursday as crews repair the approach to the bridge over the Duwamish River at Cecil Moses Park in Tukwila. From King County Parks:

The closure is scheduled to begin at 1:30 p.m. and could last for about three hours, as crews repair the trail at the western approach to the pedestrian bridge. The work includes removing shallow tree roots that have buckled the trail surface and repaving the trail.

Similar work will also take place along this stretch of trail on Wednesday, July 9, but closing the trail won’t be required. Instead, flaggers will direct trail traffic around the work areas.