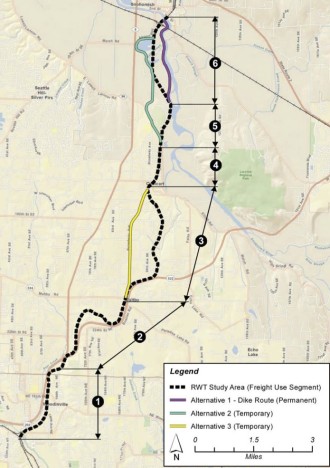 The trail may be constructed in segments. Map from a 2013 presentation to the Council

After lengthy negotiations with the Port of Seattle, Snohomish County purchased a key stretch of rail corridor that could someday link the region’s trail network from Seattle to Skagit County.

The purchase process was going strong back in 2013, but negotiations fell apart as it became apparent that maintenance costs for the segment were going to be significant. But in early March, the County and Port agreed to a lower purchase price of only $3.5 million for 12 miles of the Eastside Rail Corridor running from the City of Snohomish to Woodinville, the Herald reports.

Unlike Kirkland and King County, Snohomish County plans both a trail and active rail use on the corridor. Removing rails and building a trail on the existing railbed is by far the easiest, cheapest and quickest way to build a rail-trail. Preserving both uses of the corridor adds significant challenges and costs (and, therefore, time) to building the trail, bringing the estimated total trail construction cost to about $20 million, the Woodinville Weekly reports. Currently, there are “a few cars per week that travel those tracks, delivering goods to several businesses, such as Spectrum Glass in Woodinville,” according to the Weekly.

But with the Cross Kirkland Corridor already operational and King County moving full speed ahead on the Eastside Trail, the pressure will only increase on Snohomish County to connect their communities with their neighbors to the south.

The good news is that the two southernmost segments of the trail are the easiest to build, according to a 2013 presentation (PDF): 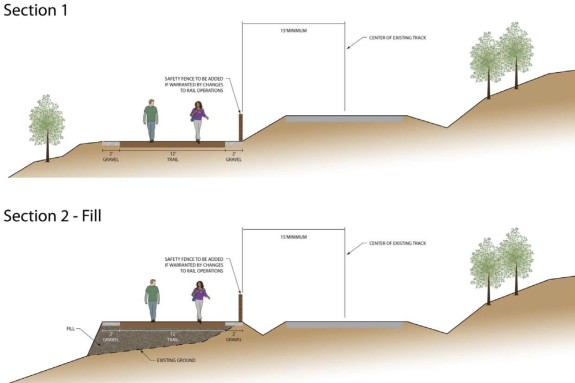 So the county could feasibly act quickly starting at the Sammamish River Trail and the northern terminus of King County’s planned Eastside Trail. If segments one and two were completed, this link would stretch to Maltby.

Many of the remaining segments between Maltby and the City of Snohomish (the start of the Centennial Trail) are challenging, however. Some on-street improvements may be compelling alternatives at least temporarily, though they come with their own challenges (and benefits).

But imagine: Once this link, the 520 Trail and the Eastside Trail are complete, you will be able to bike from Ballard, Capitol Hill, Renton and Issaquah all the way to Skagit County almost entirely on a trail. That’s 60+ miles, opening access to so many communities along the way.

This purchase is a huge step toward a linked regional trail network. Let’s make it happen.