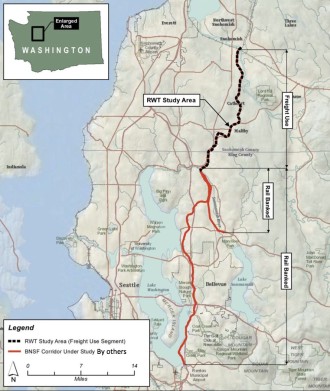 Remember those amazing plans to build a 12-mile trail to connect the City of Snohomish (and the start of the Centennial Trail) to Woodinville, the Sammaish River/Burke-Gilman Trail and the Eastside Trail? Well, there’s bad news this week: Talks between the county and the Port of Seattle have collapsed, the Herald reports.

The trail link would have been a major improvement to bicycle mobility in the region, allowing people to travel from Ballard and Eastside communities all the way to the Skagit County border using only trails.

With the 520 Trail finally set to reach Seattle in coming years and with Bellevue making first steps to develop their section of the Eastside Rail Corridor to connect to Kirkland’s crushed gravel trail, a connection to Snohomish would be an amazing link that opens up huge swaths of Snohomish county to bicycle transportation and travel. In fact, the county has been promoting bicycle tourism with some help from WA Bikes in recent years, a sign that they understand the incredible opportunities these trails could bring.

So news that the trail connection has been put on hold is discouraging. From the Herald:

“We just agreed with the port that maybe we need to start fresh,” county public works director Steve Thomsen said. “And we’re not sure what that looks like right now.”

Complications have included how to accommodate both train tracks and a pedestrian-bicycle trail over some bridges and trestles, Thomsen said. There are also potential ownership questions on portions of the trail.

The county’s plan has always been to use the corridor for both recreation and train traffic.

Snohomish city leaders have long eyed the rail segment’s potential to ferry trains full of tourists and — some day — even commuters. Mayor Karen Guzak called the setback “a short-term disappointment,” though she still harbors “a long-term hope.”

“We are still really excited about the potential for both rail and trail, but we understand the complexities of this purchase,” Guzak said. “We just need to be patient.”

The rail line sees minimal freight use today, but Snohomish County’s desires to maintain rail (and maybe add some passenger service) in addition to a trail makes construction plans complicated. This is especially true for the bridge structures.

Snohomish County had already approved a plan to buy the rail corridor. You can see more details about the plans in our previous story.