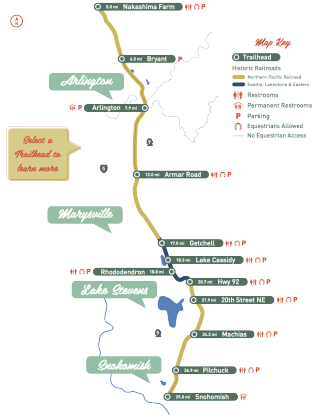 Snohomish County sees the Centennial Trail as not just a great place to walk and bike, but as a way to connect communities and explore the area’s history.

That’s according to the county’s fancy new website for the trail, which now stretches from the Skagit County border to the City of Snohomish.

Snohomish County recently approved purchase of more rail corridor that could see the trail stretch all the way to King County and connect to the planned Eastside Rail Corridor Trail and the Burke-Gilman/Sammamish River Trails.

History is one of the coolest parts about biking or walking on many rail trails. After all, most the railroads came before the highways, and many of these early transportation corridors became fairly hidden from view as businesses and residences oriented toward roads instead. So not only are the rail beds relatively flat and have few points of conflict with cars, they are also a great way to better know the place you live.

This entry was posted in news and tagged centennial trail, snohomish county. Bookmark the permalink.