Work starts soon on major Roosevelt Way repaving & redesign, will last most of 2016 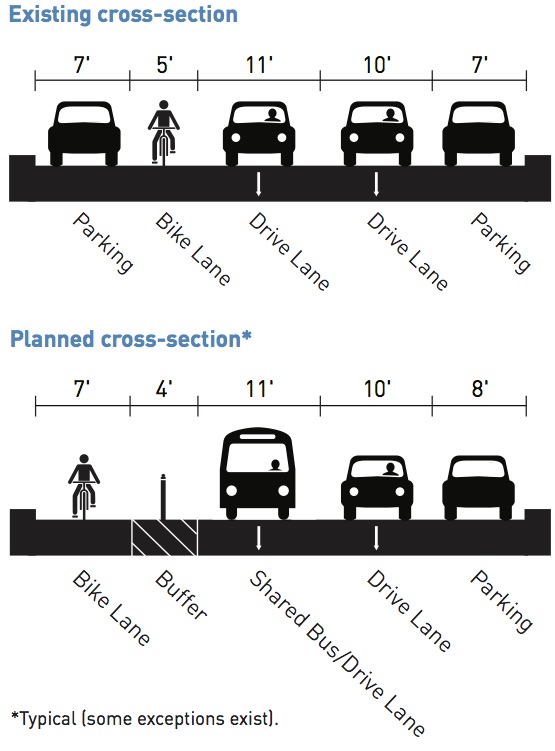 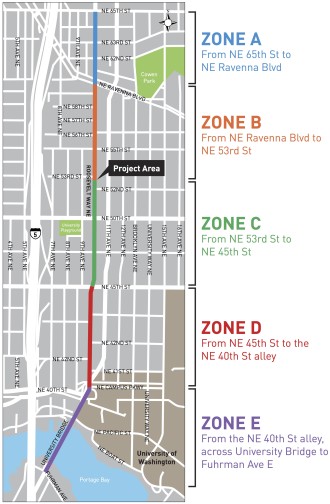 The major repaving project is expected to take at least until September before the whole length from NE 65th Street to the south end of the University Bridge is completed.

Work will happen in phases starting at the north end from NE 65th to Ravenna Blvd. Expect detours and delays. Most significantly, three weekends will require full closures of the U Bridge. We will attempt to keep on top of these closures so you can plan accordingly.

Zone E work, which covers the U Bridge, can happen at any time during the construction process, but the other zones should not have overlapping work. This may be a lesson learned from the 23rd Ave project underway currently in the Central District.

As we reported previously, the plan for the bike lane on Roosevelt appears to be a big improvement from the existing paint-only door zone bike lane. But several major intersections will not get the fully-separated treatment, requiring users to mix with turning cars.

Along with the under construction Westlake Bikeway, the Roosevelt project is one of the most significant projects for bike access and safety on tap for 2016.

More details on the construction work, from SDOT:

The Seattle Department of Transportation (SDOT) is set to begin repaving Roosevelt Way NE from NE 65th St to the south end of the University Bridge. Construction is scheduled to begin Monday, March 14, and is expected take six to eight months to complete. The contractor will remove the top several inches of asphalt, make any needed repairs to the underlying road base, and then repave with new asphalt. SDOT appreciates the public’s patience while this work is being completed.

• Creation of a protected bike lane along the west side of Roosevelt to improve safety and predictability, which will require the permanent removal of parking on that side of the street
• Consolidation of bus stops at new bus islands to allow in-lane stops and improve transit speed and reliability
• Installing new curb ramps to meet Americans with Disabilities Act (ADA) standards
• Installing pedestrian islands to reduce crossing distances and improve visibility
• Replacing buckled or cracked sidewalks

The project has been divided into five work zones.  The contractor is required to substantially finish the work on one zone before moving onto the next, with the exception of work on the University Bridge which may overlap with other zones.   The contractor, Jansen Inc., will start with the northern most zone and work south, with each zone expected to take about 8 weeks to complete.

Roosevelt Way NE will remain open to traffic throughout construction.  Two lanes of traffic will remain open during the morning (7 – 9 a.m.) and afternoon (3 – 6 p.m.) commutes.  At other times, the contractor may reduce traffic to a single travel lane.  Access will be maintained to all neighborhood shops and restaurants, and SDOT encourages the community to continue shopping and dining at businesses during construction.

Regular hours of construction will be Monday through Friday, 7 a.m. to 5 p.m.  Night and/or weekend construction is only expected for work on the University Bridge.
Work on the University Bridge will require its full closure to vehicular, bike, and pedestrian traffic for three weekends.  On those dates, traffic will be detoured to the Montlake Bridge.  The exact dates of these closures have yet to be determined, but will not occur on any weekends with major community events (i.e. Opening Day of boating season, University Street Fair, and University of Washington graduation) and will be coordinated with other major planned road closures.

• On-street parking removal on Roosevelt Way NE during construction; parking on the west side of Roosevelt will be permanently removed to accommodate the new protected bike lane
• Lane restrictions, although at least one lane will always remain open, and two lanes will be open during the morning (7 – 9 a.m.) and afternoon (3 – 6 p.m.) commutes
• Temporary delays and longer travel time through the work zones
• Closed sections of sidewalks, with pedestrian detours
• Bicycle detours
• Construction noise, dust, and vibration
• Temporary bus stop relocations or closures
• Steel plates on the roadway
• Short-term access restrictions to driveways and side streets (SDOT will notify affected properties in advance)
• Rough pavement after grinding

More information can be found at the project website, located at www.seattle.gov/transportation/pave_roosevelt.htm.  To contact the project team call (206) 727-3575 or email [email protected]

Here’s an intersection-by-intersection look at the curb work planned: 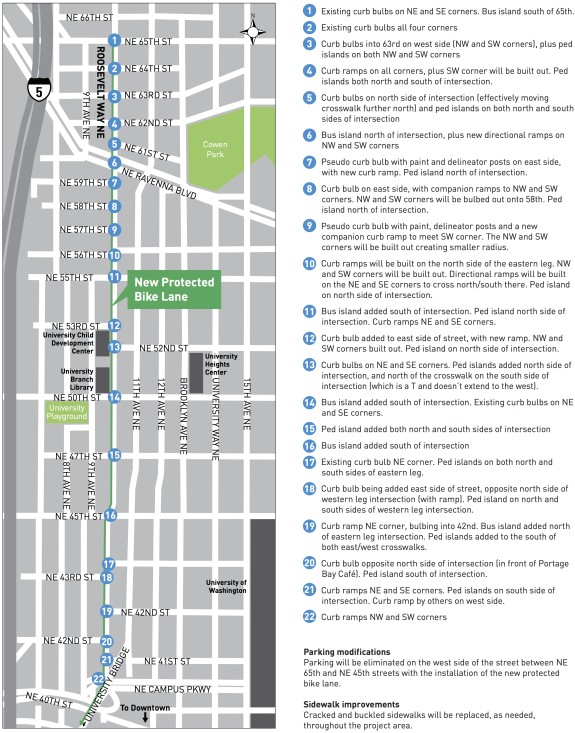 And for those interested in wondering where all that parking is going, here’s the plan to open up spaces on side streets and modify parking rules to offset the reduction: 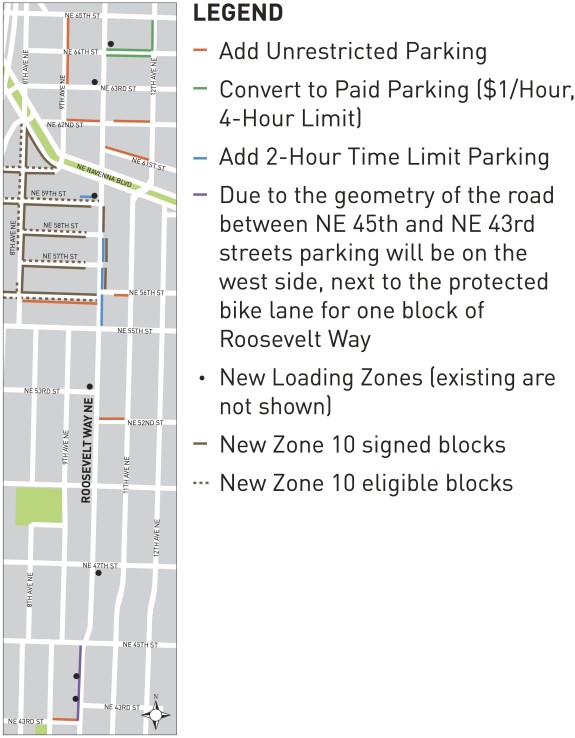 Founder and Editor of Seattle Bike Blog.
View all posts by Tom Fucoloro →
This entry was posted in news and tagged 2016 construction, roosevelt, sdot. Bookmark the permalink.

20 Responses to Work starts soon on major Roosevelt Way repaving & redesign, will last most of 2016