5th Ave has a new protected bike lane … for one block 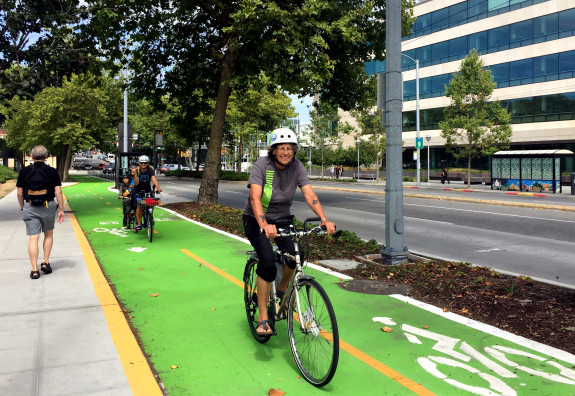 The city recently completed and opened a one-block section of protected bike lane on 5th Ave just south of Mercer.

Like the Mercer bike lane, the lane is glorious where it exists. It’s bright green and separated from the street, sidewalk and bus stop. Not only is the bike lane raised above street level (but below sidewalk level), but a railing protects the lane from busy 5th Avenue traffic and buses pulling to the stop.

In fact, that railing is the reason for the delay, according to SDOT Spokesperson Norm Mah:

A delay in the delivery of the Safety Railing unrelated to this project at the fabricators meant  SDOT received the railing just a few days before it was installed last week.

But the most disappointing aspect of the new lane is its abrupt end. SDOT and Seattle Public Schools (“SPS”) failed to come to an agreement to extend the bike lane at least to Harrison Street, with direct access to Seattle Center.

Instead, the bike lane just dumps you confusingly into the sprawling, busy and very poorly-paved paved parking lot in front of Memorial Stadium (owned by SPS). There’s no clear path to access any of the Seattle Center destinations or bike routes in Belltown and Lower Queen Anne.

There are long-term hopes to completely remake the stadium and reconnect Republican Street (AKA “August Wilson Way”) between 5th Ave and Seattle Center. But there must be a way to complete a safe bike connection in the meantime. Two public entities failing to work together is not an acceptable excuse for maintaining an incomplete and possibly dangerous bike route. 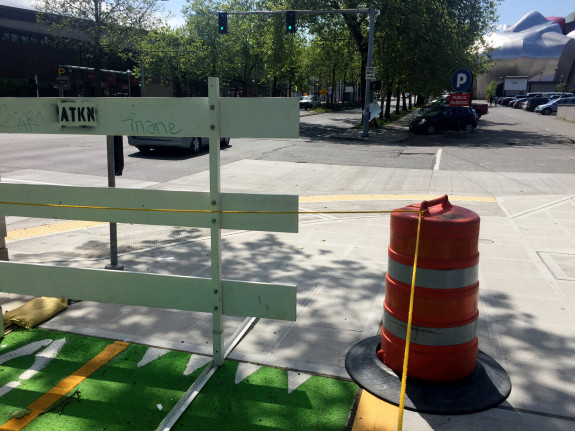 Photo of the bike lane end, taken before it officially opened.