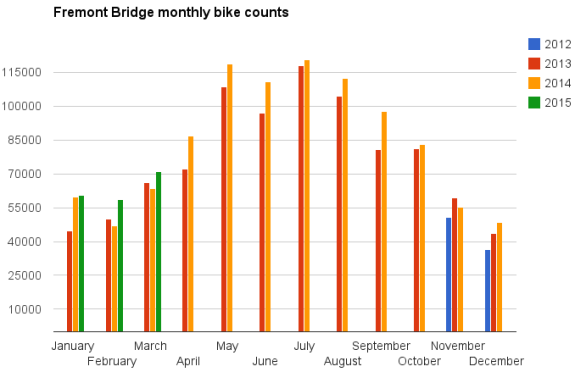 The number of bicycle trips across the Fremont Bridge continues to climb year-over-year. In fact, a mild winter has helped to break all-time monthly bike count records every month so far in 2015.

In fact, bike counts have increased 14 of the 17 months for which we have year-over-year data. February saw a giant, 25 percent increase in bike volumes compared to February 2014. March saw a 12 percent increase.

This is perhaps especially impressive considering the significant construction headaches that have constrained space on the Fremont Bridge sidewalks. Many people choose to bike across the metal grate and, therefore, don’t get counted. (Be very careful biking on the metal grate roadway, which can be extremely slick when wet)

This data is encouraging because it suggests that more people are taking up biking and making more trips. 2014 saw an 8.5 percent increase over 2013. 2014 was also the first year bike trips on the bridge topped one million in a single year.

The city’s other bike counters also started spitting out their first ever year-over-year data in January. Now would be a great time for someone to create a good online visual tool for this data. I’d love to help make it happen here on Seattle Bike Blog. Get in touch if you’re interested: [email protected].

Here are the data sets on data.seattle.gov (updated monthly):