We did it! One million bike trips over the Fremont Bridge in 2014! And reader Jay Talbot got a photo of magic number 645 Sunday evening — the one millionth trip of the year. How cool is that? It’s even cooler that it was a cargo bike, highlighting another trend in Seattle as more and more people use bikes to carry more kinds of stuff (and kids!) typically carried in cars. Thanks Jay!

I’ve had a lot of fun tracking Fremont Bridge bike trips this year, the first full year with complete year-to-year comparison data. Just having a display on the bridge ticking people away as they bike across is fun, but having multiple years of data to study revealed a fine-grained level of bike use data we’ve never had before.

The major takeaway: Biking is growing in Seattle. A lot. Even with sidewalk closures the past couple months that has diverted many bike trips onto the main deck (bypassing the counter), Fremont Bridge bike trips were up 8.5 percent over 2013. To put that another way, this year’s bike count passed 2013’s total in mid-November. Every bike trip across the bridge since then has been a new trip. People are changing the way they get around town, and a whole lot of them are choosing to bike. 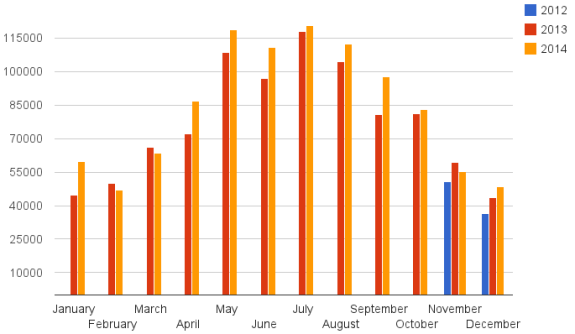 UPDATED: Final totals for 2014 as of New Years Day.

Of course, the Fremont Bridge is not representative of the entire city’s bike rates and patterns. Neighborhoods on the north end have much more developed and connected bike routes than the south end. But the Fremont Bridge is one of the city’s best bike route pinch points if you are trying to get a good consistent measure, especially for commute trips.

The Spokane Street Bridge counter is just about to spit out its first full month of year-to-year data (it did not start recording dependable data until November 24, 2013), so it will be very interesting to compare use patterns on the two bridges and see if the same growth trends are happening in West Seattle.

At the end of January, we will also start getting our first looks at year-to-year data from bike counters all around the city, including on neighborhood greenway routes. So the bike data flood is just getting started.

If you haven’t read Mike Logsdon’s totally awesome Fremont Bridge bike trip statistical analysis series published here over the summer, do yourself a favor and do that now. It answers a lot of questions about biking habits and what kinds of factors can impact bike rates on a day-to-day basis. But it also raises just as many questions for future study.

Not that we are getting rich bike use data, there’s a lot of math to do to see how city investments and other encouragement efforts are making a measurable impact on Seattle’s congestion, economy and public health. That kind of analysis is beyond my abilities, but it would be a pretty cool study to see and could put some hard numbers behind the call to fully invest in the Bike Master Plan.

But before we get to all that, there’s one big detail we need to figure out first: What kind of party should we throw to celebrate? Let us know in the comments below! 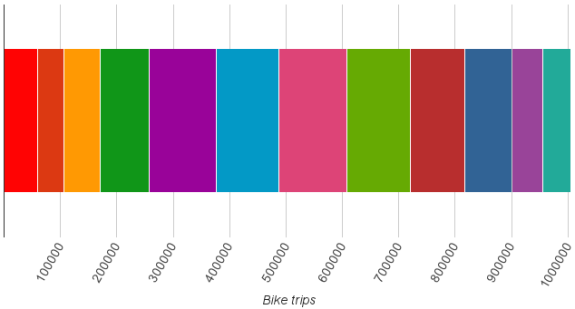 Founder and Editor of Seattle Bike Blog.
View all posts by Tom Fucoloro →
This entry was posted in news and tagged bike counter, fremont, fremont bridge. Bookmark the permalink.