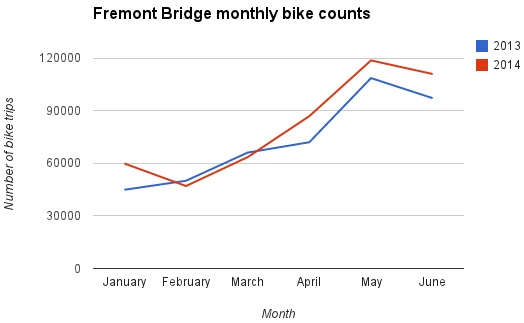 Bike counts over the Fremont Bridge continue to significantly outpace 2013, with June counts up more than 14 percent year-over-year.

In the first half of the year, people made 486,798 bike trips across the bridge. That puts us on pace to break one million bike trips over the bridge in 2014, since fall bike ridership is typically higher than winter.

For more in-depth analysis of the Fremont Bridge bike count data, make sure you read Mike Logsdon’s June statistical series. If you are even more technically-minded, Jake Vanderplas has a Python-powered analysis here (I assume it’s great, but I would be lying if I said I totally understand it … haha.)

Founder and Editor of Seattle Bike Blog.
View all posts by Tom Fucoloro →
This entry was posted in news and tagged bike counter, fremont, fremont bridge. Bookmark the permalink.