King 5’s Chris Daniels recently reported from our neighbor to the north on something Vancouver, BC, has to help people get around their downtown: A comfortable and protected network of bike lanes.

As Seattle finally kicks off work on a network of protected bike lanes downtown, it’s wise to look to Vancouver to get a glimpse a few years into the future. I wish all transportation reporters who will be covering Seattle’s bike network had the chance to go bike around Vancouver. It’s invaluable context for what Seattle is trying to do here.

So are the bike lanes increasing safety? Are more people biking? Did they make car traffic worse?

In fact, as Daniels reports that collisions are down 17 percent. The CBC reports that bike traffic in June broke records in the city, with some Fremont-Bridge-style bike counters recording 200,000 trips monthly.

And since the bike lanes have gone in, traffic congestion downtown has dropped 20 percent. Though other factors are certainly at play in this reduction in congestion (like the city’s transit improvements), it should help allay fears that bike lanes will cause a traffic crunch here.

If you have never been to Vancouver, well, drop what you’re doing, grab your passport and go! It’s a wonderful city. But it’s also a great case study in how Seattle can improve safety and bikeability downtown. Vancouver’s downtown is much busier than Seattle’s, yet they have been able to build a quality network of bike lanes there. If they can, we definitely can. 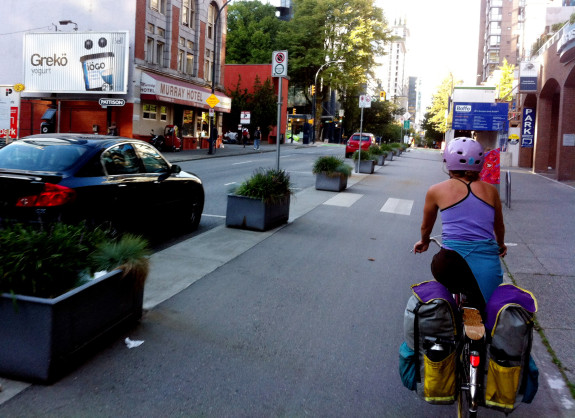 Vancouver doesn’t pinch pennies with their bike lanes, which is why they can cost $1M for ten blocks.

And bike lanes aren’t the only lesson from Vancouver. On their style of neighborhood greenways, some streets have park-like traffic diverters. These parks are built what was once a street, creating precious green space in a very dense neighborhood and reducing cut-through traffic on heavily residential streets. Below is how these car-free street parks look in one downtown residential neighborhood. Imagine this on, say, University Street on First Hill or S Myrtle Street near Othello Station or 17th Ave NW in the heart of the Ballard (or so many other places). 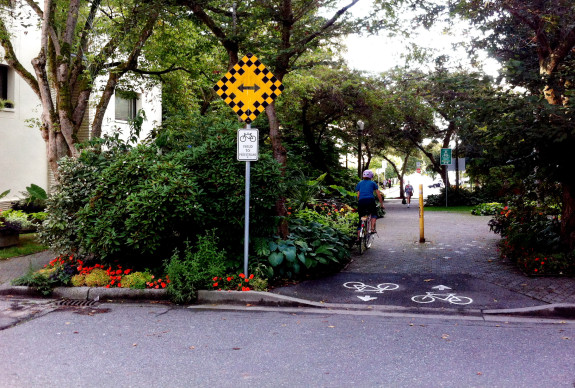 Seattle’s has some historic examples of this on Capitol Hill (mostly east of Volunteer Park), but they are a bit smaller and the cut-throughs aren’t as bicycle friendly (especially for families with big bikes). More recently, the city is trying a bigger street park at University and Boylston on First Hill. They are using temporary materials to get it built quick and cheap, which is a smart way to test it out and help develop a more permanent park later.

This entry was posted in news and tagged chris daniels, downtown, king 5, vancouver. Bookmark the permalink.