Safety changes — but no bike lanes — planned for I-35 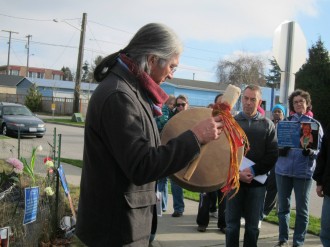 35th Ave SW is not an Interstate. It’s not even a state highway. So when neighbors refer to this city street as “I-35,” you know there’s a serious speeding and traffic safety problem.

And those neighbors are not being as hyperbolic as it sounds. There is a collision every couple days on 35th Ave SW. Someone is injured every week.

And in the past decade, five people have died. One of those people was James St. Clair, who was killed while walking across the street a few months ago. Family and neighbors gathered in January to walk in his memory and call for safety so nobody else is killed or seriously injured on this notoriously-dangerous street.

West Seattle resident and City Council Transportation Committee Chair Tom Rasmussen was there, too, and he called on the city to study the street and recommend solutions. The Road Safety Corridor team got on the case and reported their initial concepts (PDF) for safety changes this week (see coverage of Tuesday’s meeting via West Seattle Blog).

All options would significantly reduce collisions, speeding and serious injuries on 35th. Neighbors may need to retire the name I-35 when the changes go into effect later this year and early 2016.

You can learn more at their second meeting 3:15 – 5:15 p.m. Thursday at the Southwest Library Second Floor Meeting Room.

35th Ave SW is on the Bike Master Plan, which recommends protected bike lanes from Fauntleroy all the way to the city limit. However, the city is not considering bike lanes in either of the options presented, citing “public comment.” Instead, they will accelerate building a neighborhood greenway mostly on 34th Ave SW, though the initial route presented would not connect to the Junction like 35th does. The city will study it in 2016 and build it in 2017.

Don Brubeck of West Seattle Bike Connections said the group does not consider 35th Ave SW bike lanes a high priority (though there was some dissent within the group on this point).

“We have other battles we’re trying to win,” said Brubeck, citing city plans to fix the large intersection connecting the Alki Trail to the West Seattle Bridge and the need for bike lanes on diagonal streets.

“Angled streets are much more difficult to find parallel routes to,” he said.

However, 35th Ave SW is the most direct and flat route through this part of the neighborhood from the White Center border to both the Junction and the West Seattle Bridge.

It’s a concerning precedent to set that facilities recommended in the Bike Master Plan would not even make it into the studied alternatives.

Below is a quick look at the options, from SDOT’s presentation (PDF):

First off, the speed limit will be reduced from 35 mph to 30. Reports from the initial meeting said attendees cheered when this was announced.

That’s probably because attendees are well aware of how dangerous I-35 is. Sure, it’s not quite as dangerous as Rainier Ave, but that’s a ridiculously high bar. Like Rainier, however, collisions happen along the entire route pointing to a core problem with the street’s design: 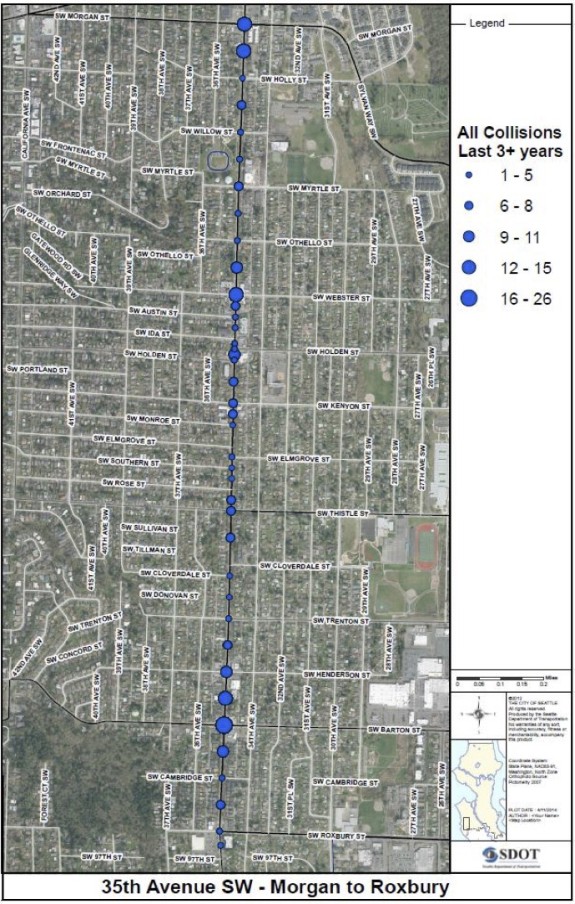 Traffic volumes are pretty high up near Alaska, but they fall off as you head south. This graph show Average Daily Traffic at various points:

Alternative 1 would change the entire project area from four lanes to three, including a new center turn lane: 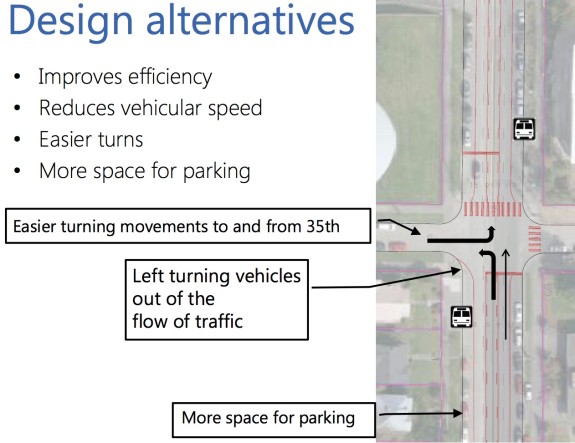 In essence, the street would have wider spaces for on-street parking on both sides, one lane in each direction and a new center turn lane.

But this design will only improve safety if there is enough parking demand to actually fill those parking lanes, which I doubt is true (a quick glance via Google Earth shows very low parking usage for much of the project area). If parking demand is low, it would be safer for everyone to build bike lanes to make sure the city does not essentially create dangerously-wide travel lanes. Wide lanes encourage speeding and make it more difficult to cross the street.

If bike lanes are not included, the city should at least consider a 25 mph speed limit so the street is a little safer for people who choose to bike on 35th.

I understand that bike lanes on 35th might not be West Seattle’s highest bike improvement priority. There are many challenging streets in the neighborhood. But the city is investing time and money right now to make this particular street safer, and it would be a missed opportunity if we fail to take action now to prevent a tragedy. For a variety of reasons (because it is the most direct or they don’t know another route, etc), people do and will continue to bike on 35th whether there is a neighborhood greenway nearby or not. We should not leave them out of a safer 35th Ave SW.