How amazing would this West Seattle flyover trail be?

It’s one of the most infamous intersections in West Seattle. It sucks for everyone, whether you’re driving a freight truck to the Port or driving a car home from work. But it especially sucks for anyone walking or biking (remember that video of a bike commuter cooking a breakfast burrito in the time it took for the light to change?).

I’m talking about the five-way intersection at W Marginal Way, SW Spokane St, Delridge Way SW, Chelan Ave SW and the Port of Seattle Terminal 5 access road. In addition to all those streets, this is also the location of the West Seattle bike route brain stem. All trails lead here.

There are no easy solutions, but there is an awesome one: SDOT is in the early stages of a design concept for an elevated trail connecting the west end of the lower West Seattle Bridge/Duwamish Trail/Delridge Trail to the Alki Trail.

By cantilevering a trail onto the side of an existing bridge structure, the trail would allow people walking or biking to completely bypass the giant intersection via a gradually-graded and direct connection: 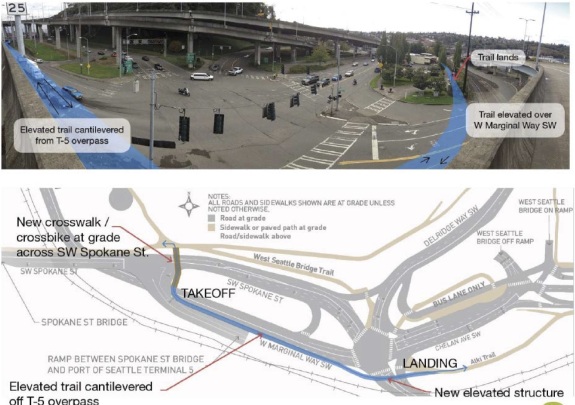 Images from an SDOT presentation to the Bike Advisory Board

Now, before you get too excited, this idea is identified as a “long-term” solution to the problem. It has no funding. In fact, it doesn’t even have a price tag yet, since planners are still in the process of figuring that out. But it won’t be cheap. New elevated structures never are.

These short-term improvements won’t make the intersection comfortable for people of all ages and abilities (the ultimate goal of the city’s Bike Master Plan), but they should make things safer and more clear to all users. They are scheduled to go in place this summer. 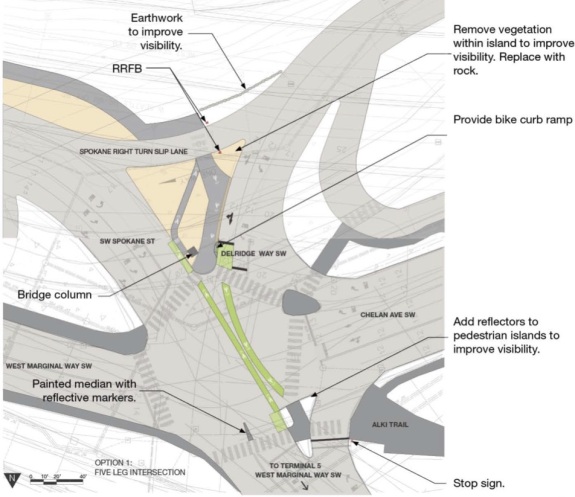 SDOT also has an idea for what they call a “mid-term” option. This would basically be a ground-level trail that wraps way around the intersection and loops back up to the bridge. This idea received fairly lukewarm response at Wednesday’s meeting of the Seattle Bicycle Advisory Board, who suggested efforts would be better used to develop the more ambitious flyover trail. Here’s a look at that option: 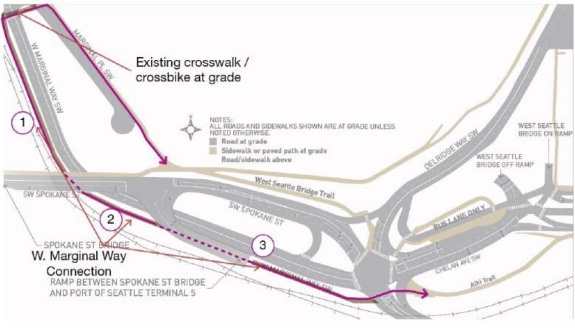 You can check out the presentation slides in this PDF.

41 Responses to How amazing would this West Seattle flyover trail be?