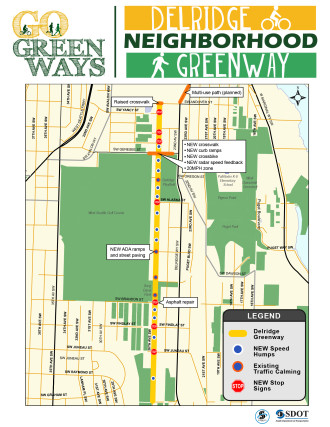 The city has officially completed the first neighborhood greenway in West Seattle, a 1.5-mile stretch of 26th Ave SW from SW Andover Street to the SW Graham Street stairway leading to the High Point neighborhood.

The stretch is the first route in what neighbors hope will be a network of low-stress bike routes connecting homes to the area’s many parks and neighborhood destinations as well as the lower West Seattle Bridge and the hub of trail connections there. The project was supported by West Seattle Greenways and the North Delridge Neighborhood Council.

The 26th Ave SW neighborhood greenway mostly includes elements we have seen on other similar projects, such as speed humps, wayfinding signs and a 20 MPH speed limit. Many elements have been in place for a while, but the city only recently announced its opening.

But one element did stand out: A raised crosswalk at the intersection with SW Andover St: 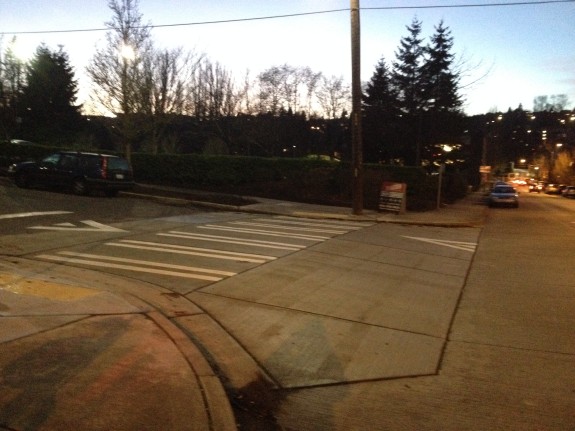 Sorry for the fuzzy photo, it was getting dark!

Raised crosswalks are cool because they send this not-so-subtle message to people driving (and biking) that they are entering a space that belongs first and foremost to people walking. Where crossing the street in far too many places in the city can feel like a stressful rush to get out of the cars’ way, a raised crosswalk is like a red carpet. People driving have to drive up to the sidewalk’s level to cross.

While raised crosswalks are not new to Seattle, this is the first time I’m aware the city has installed one as part of a neighborhood greenway. 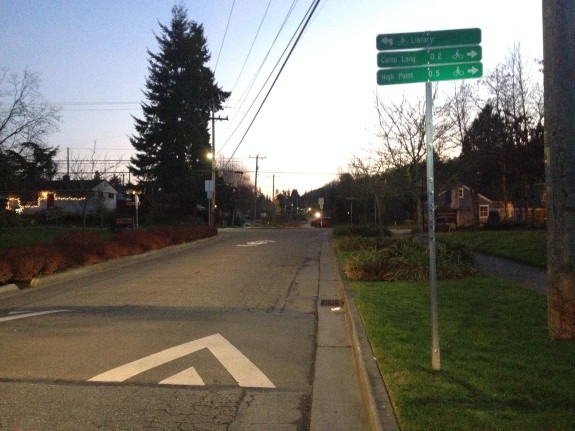 More work is scheduled this year to widen the tiny sidewalk on the east side of Delridge Way between SW Andover Street and the trail hub under the West Seattle Bridge, a long-overdue project that will dramatically improve the connection between the Delridge neighborhood and the Alki Trail, Duwamish Trail, lower West Seattle Bridge and routes to downtown and beyond.