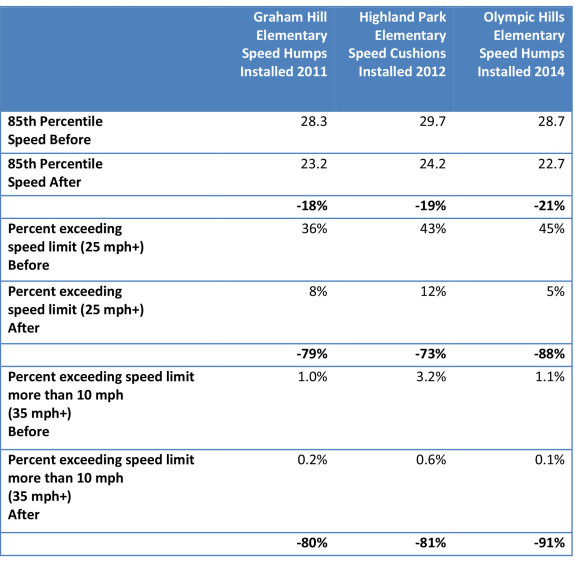 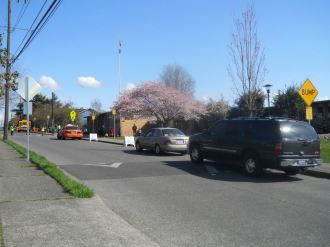 Seattle started installing speed humps as part of neighborhood greenways and Safe Routes to School projects a couple years ago. And wisely, SDOT staff measured speed data before the speed humps were installed so they could see whether the humps are actually effective.

Total speeding on the streets near three elementary schools dropped between 79 – 88 percent after speed humps were installed, and high-end speeding was nearly eradicated according to SDOT.

That’s why speed humps are sometimes referred to as “sleeping police officers,” though they cost a lot less and stay on duty forever.

Car speed is among the most important factors that determine how serious a person is injured in a collision and, of course, whether the collision occurs in the first place: 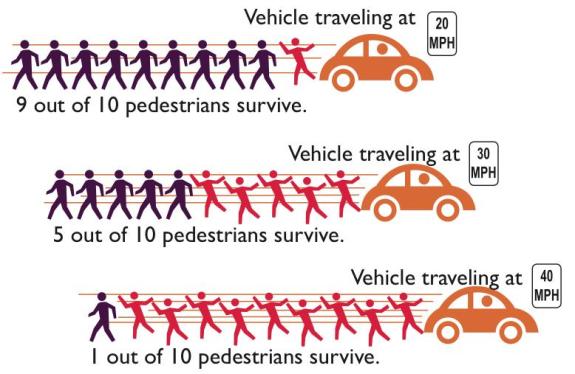 Speed “humps” are different from the speed “bumps” you encounter sometimes in parking lots. The humps are more gradual and are not meant to bring people to a nearly complete stop. If you are driving around 20 mph or below, you will not need to adjust your speed to go over them. If you are driving faster than that, however, you will need to slow or face a jolt. And unlike with some speed bumps, the speed humps are not so sudden that they are likely to cause someone on a bike to crash.The city’s speed humps will save lives, and they will prevent many people from serious and sometimes debilitating injuries. But they will also make neighborhood streets places where people of all ages can live, have fun and get around on foot and bike. Today, too many streets are dangerous places that we avoid, but it doesn’t need to be that way.We have the tools to make our streets safer, and the speed hump is a powerful one. We just need to invest in them.

Founder and Editor of Seattle Bike Blog.
View all posts by Tom Fucoloro →
This entry was posted in news and tagged sdot, speed humps, traffic calming. Bookmark the permalink.