The 39th Ave NE neighborhood greenway was among the city’s first good tries at such a facility, and it was mostly successful. But there are some things SDOT has learned since (like the importance of speed humps to keep through-traffic slow and discourage long drives along the route). So the good news is that the city is adding speed humps and stop signs along the route to bring the route closer to their current standards. 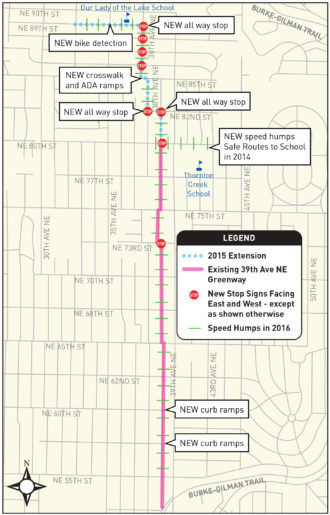 Details from and SDOT mailer (PDF):

The Wedgwood neighborhood greenway on 39th Ave NE opened in 2012 and was extended north of NE 80th St in 2014. In 2014, we evaluated the existing greenway, which met many of our current design guidelines, but lacked speed humps to encourage calm speeds. To determine if speed humps were needed car volumes and speeds were analyzed.

Traffic volumes along the route range from about 100 to 300 vehicles a day falling well below greenway design threshold of 1,500. The speed in which 85 percent of people are driving at—or below—is 25 to 27 miles per hour (mph). This is higher than the posted speed limit of 20 mph and confirms speed humps are a good investment. At lower speeds, people driving can see more of their surroundings and have more time to react to possible hazards.

About one speed hump a block will be added along 39th Ave NE between N 80th Street and the Burke-Gilman Trail. Construction is scheduled to begin early-July and be done over six to eight weeks. We are installing the speed humps in-between larger paving projects and work will happen in one to two day periods. Speed hump warning signs are already in place and bagged. Adjacent properties will be notified of construction in advance when No-Park signs are placed.

MORE PEOPLE ARE WALKING AND BIKING

We also took feedback via an online survey. The majority of people sampled said they walk and bike along 39th Ave NE and have seen more people walking and biking since it’s become a neighborhood greenway. This is great news. Neighborhood greenways support a flexible transportation system. One where people have choices and can safely make their trips walking, biking and driving.

Founder and Editor of Seattle Bike Blog.
View all posts by Tom Fucoloro →
This entry was posted in news and tagged 39th Ave NE, Gone Bikin' 2016. Bookmark the permalink.