Posted on September 2, 2014 by Andres Salomon

EDITOR’S NOTE: Andres Salomon is an active member of NE Seattle Greenways who bikes his kid around town and cares deeply about road safety. We have been talking a lot about how protected bike lanes and walking safety could be part of the city’s plans to repave Roosevelt Way in 2015. Here are some of his thoughts on how to make a safer street and some information on how you can get involved and help make a better and safer street. 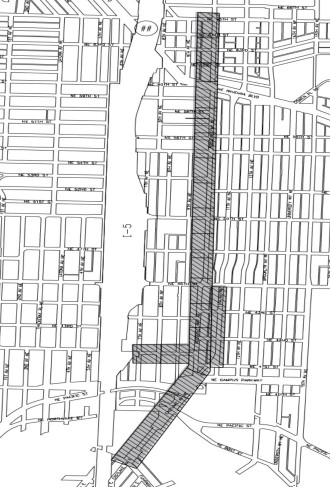 Project area, from the city

The City of Seattle is currently preparing plans to repave and restripe Roosevelt Way NE in 2015.  The plan includes some minor improvements for transit riders, but is lacking in general safety improvements and bicycle facilities.  This is especially important for a bicycle route that is a major backbone of the bicycle network in the city’s Bicycle Master Plan.

We can and should be asking much more from our multi-million dollar maintenance projects. Concerned neighbors are organizing community efforts to help identify needed walking and biking improvements along Roosevelt Way.  A walking audit is scheduled for 5:30 p.m. Tuesday (today!), and a bike brainstorming session is scheduled for 6 p.m. Wednesday.

The repaving project includes the University Bridge (Eastlake Ave NE), Roosevelt Way NE between the University Bridge and NE 65th St, and small portions of 11th Ave NE and NE 42nd St.  The currently 30 percent complete plan features widened sidewalks at bus stops and legally-required ADA-compliant curb ramps at every intersection.  Where the sidewalks are to be widened, parking on one side of the street will be removed.  A turn lane at the intersection of NE 45th St will also be removed, narrowing the distance that pedestrians must cross.  While these are welcome improvements to the street, the restriping does little to address the numerous safety concerns with Roosevelt Way NE. 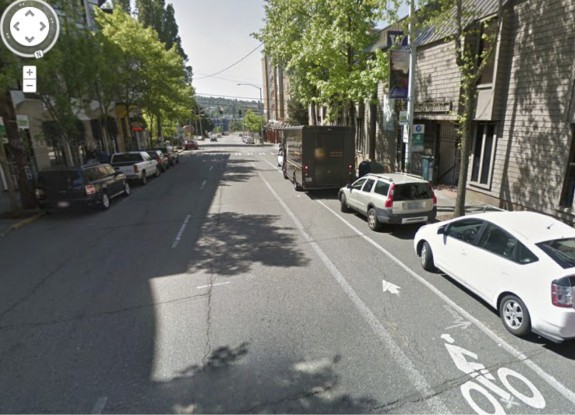 The plan maintains the currently dangerous downhill ‘door zone’ bike lane.  This bike lane conflicts with buses, which are forced to block the bike lane when picking up passengers.  Roosevelt Way NE is tied with downtown’s 2nd Ave as one of the most dangerous streets in Seattle for biking, going by number of collisions.  Downhill speeds, combined with opening car doors, driveways, and parking garage entrances make riding on Roosevelt particularly nerve-wracking.  Light rail construction vehicles also make heavy use of Roosevelt, which greatly adds to discomfort when being passed by large trucks two feet away. 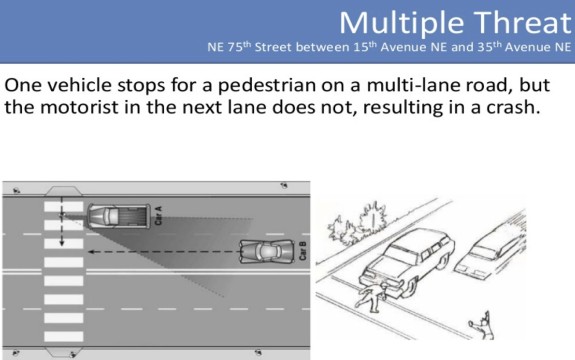 According to the city’s early plans, two general-purpose travel lanes for cars and buses will remain, creating dangerous crossings for pedestrians and delays for buses caught in general vehicle traffic.  The neighborhood has long identified Roosevelt Way and 11th Ave as problem streets for pedestrians to cross.  Two travel lanes lead to the deadly “multiple threat” problem faced by crossing the street on foot or bike.  Planning documents such as the Roosevelt Streetscape Plan recommend making the area more pedestrian-friendly by turning Roosevelt and 11th into two-way streets.  However, due to pricey traffic signal reworking required at every intersection, such a project might be cost prohibitive in the near future.

The plan also ignores the many narrow and broken sidewalks that don’t contain bus stops.  This is another need that could balloon the cost of the project, but it is worth examining.  Tuesday’s walking audit will help identify problems and ask Seattle’s Dept of Transportation to fix them.

We’re putting millions of dollars of Bridging The Gap and Arterial Asphalt and Concrete Program funds into this project, shouldn’t we be getting more out of it? Shouldn’t the city be proactively addressing safety concerns during maintenance projects instead of waiting for deadly collisions and community outrage to force those changes to happen?

Let’s think about some changes we can make to this corridor only using lower-cost treatments like paint, signs, and minimal sidewalk modifications that are already planned.  I’m sure many other ideas will come from the upcoming community events, but here are a few ideas that I have been considering.

The biggest improvement that we could make during this repaving project for the safety and comfort of vulnerable users would be to remove a general purpose travel lane.  Even if no other improvements were made, this would vastly improve pedestrian crossings, force cars to go slower (instead of rushing between traffic lights), and reduce collisions.

Average weekday vehicle traffic for the street is less than 12,000 vehicles per day (including bikes).  While these numbers are merely guidelines, even doubling that falls under the 25,000 ADT threshold that Seattle uses for road diets. It’s also worth pointing out that I-5 runs parallel to Roosevelt, and is only 1,000 feet away.  NE Seattle does not need Roosevelt and 11th to be 2 lanes each.

Of course, it would be silly to leave that space unused.  The Bicycle Master Plan calls for protected bicycle lanes on Roosevelt as part of a city-wide all-ages-and-abilities network.  Removing a general purpose travel lane leaves plenty of space for a buffered bicycle lane, which can later be upgraded to a proper protected bike lane when funds become available.  Since the city is already widening sidewalks at bus stops, we could instead have Dexter-style bus islands to remove bus and bicycle conflicts. 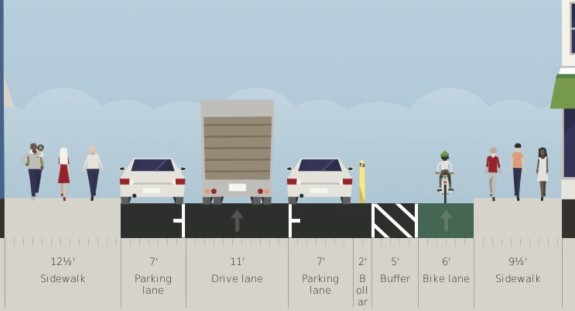 Another option for the space would be a bus-only (or Bus Rapid Transit) lane.  This option would involve a longer discussion between Metro and other parties, but I wanted to point out the possibility.  A bus-only lane might help with bus and bicycle conflicts, as well as keeping buses from getting stuck in general vehicle traffic.  Here’s what that could look like: 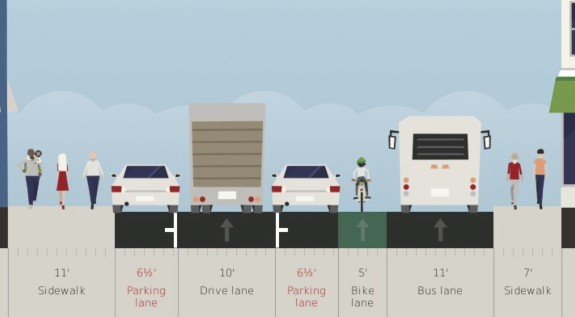 Finally, if we decided that we want both a protected bike lane and a bus-only lane, we can make space for both by removing parking on one side of the street.  This would be politically contentious (as is typically the case), but would bring about a vastly improved streetscape for pedestrians, buses, and bikes.  A block without a bus stop might look like this, for example: 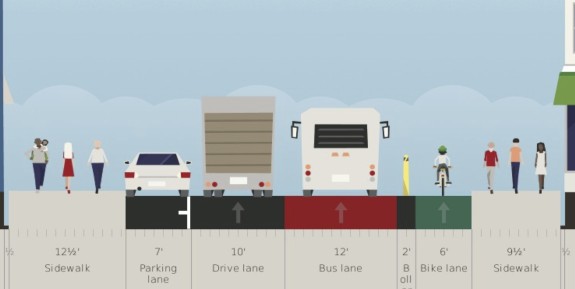 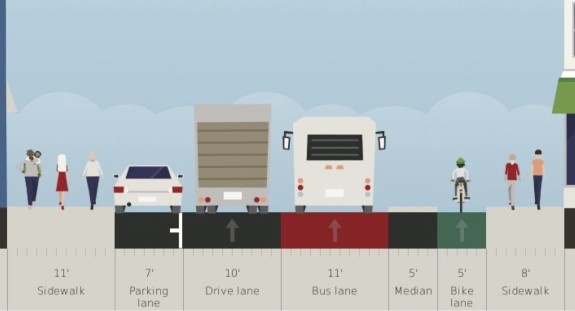 If planners do not find extra funding needed for bike-specific traffic signals and instead stick to quick, cheap, paint-only solutions, the 2015 construction could use non-protected “mixing zones” at intersections.  Bikes would share a lane with buses and cars that are turning right.  As funding became available, later work could focus on traffic signal upgrades that allowed bikes to safely traverse intersections without needing to mix with cars or buses.

We should be demanding safety improvements on our city streets.  It is completely unacceptable that a street known to be as dangerous as Roosevelt Way NE is not being aggressively examined for traffic calming and other improvements.  I look forward to our community successfully engaging with the city to push forward on additional solutions that will Roosevelt a safer, more humane street.

Andres is a father and active member of NE Seattle Greenways.
View all posts by Andres Salomon →
This entry was posted in news and tagged andres salomon, construction, roosevelt, sdot. Bookmark the permalink.

41 Responses to Salomon: Safety changes need to be part of Roosevelt repaving project