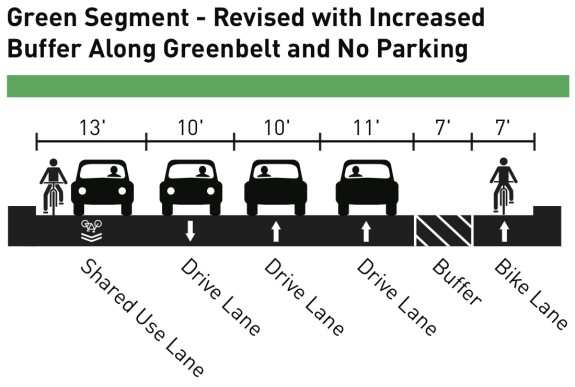 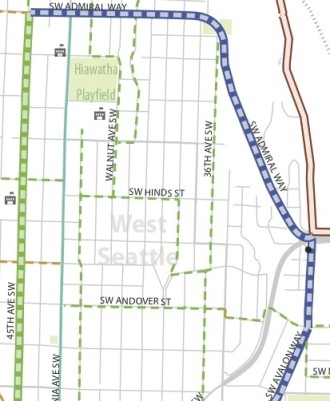 The city will make some small improvements to the SW Admiral Way bike lane this summer, but the changes will not meet the recommendation in the Bike Master Plan, West Seattle Blog reports.

The bike plan notes Admiral Way as a key street for protected bike lanes, but the city’s proposed plan includes sharrows for white-knuckle downhill travel and a paint-only bike lane uphill that is sometimes squeezed into the parked car door zone.

I asked SDOT why the plans are not following the Bike Master Plan recommendation, and Bicycle and Pedestrian Program head Sam Woods emailed this response:

This is an upgrade to an existing facility that we are able to make this year, and it does not preclude installing a protected bike lane in the future. We considered a parking-buffered protected up hill bike lane, but because there are typically not many vehicles parked in the greenbelt area, we didn’t want to have just a few vehicles “floating” in the buffer area, or to have people tempted to park in the bike lane.

We also considered a two-way protected bike lane on the east side of the street, but the connection to the Alki/West Seattle Bridge Trail would require all cyclists to use the stairway runnel (between 30th Ave SW and SW Admiral Wy), there would have had additional parking impacts, and we would have had to remove the pedestrian island for the crossing at SW City View St.  If we do find that people are parking in the buffer area, we could consider adding flexible delineator posts, which would make a portion of the facility a protected bike lane.

Here’s a look at the plans (green segments follow alignment from image at the top of the post): 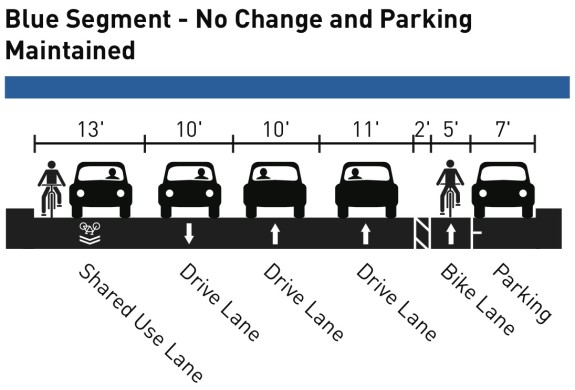 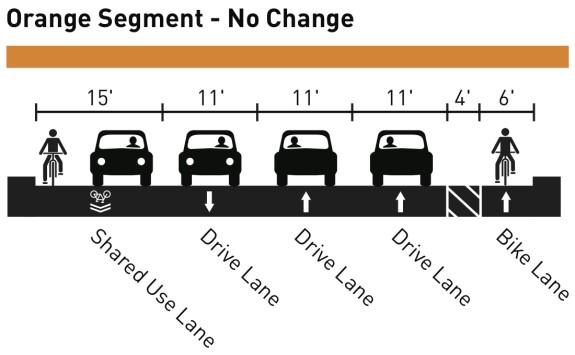 The city actually did propose protected and buffered bike lanes for the street way back in 2010, but those plans were scaled back amid concerns about parking loss and the loss of a downhill general traffic lane. Here’s what that plan looked like: 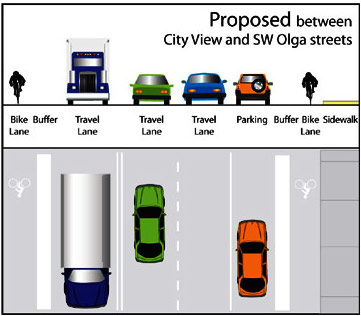 And the plans continue to neglect the need for bike lanes north and west of the Olga St viewpoint, where the uphill bike lane ends abruptly and sends people on bikes into a shared traffic lane on the busy four-lane street: 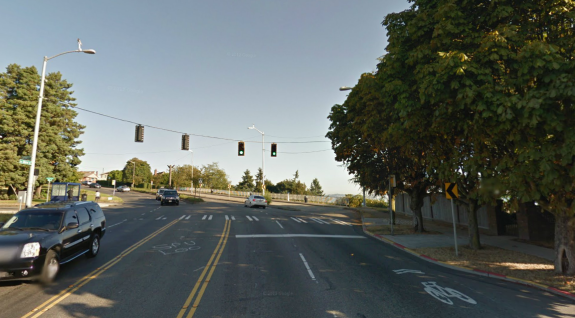 So the city still has a lot of work to do on Admiral Way. This summer will bring a few small nudges to make biking up the hill a little more comfortable, but the real solution is going to require investment in bold changes for this vital West Seattle connection.

What would you like to see happen on Admiral Way? What are the most challenging or uncomfortable spots today?