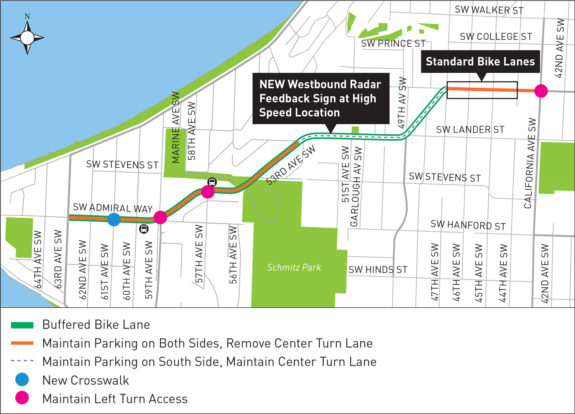 After more than a year of public outreach and significant design changes, SDOT is just about ready to paint bike lanes on SW Admiral Way from Alki to (almost) California Ave SW.

The official painting schedule is not yet out, but work should be completed before October, according to the project website.

While the bike lane connection will be a huge boost for the West Seattle bike network, the biggest beneficiaries of the project will be people in cars and people who park along the street. Speeding is rampant in large part due to wide travel lanes, and there are a lot of collisions every year: 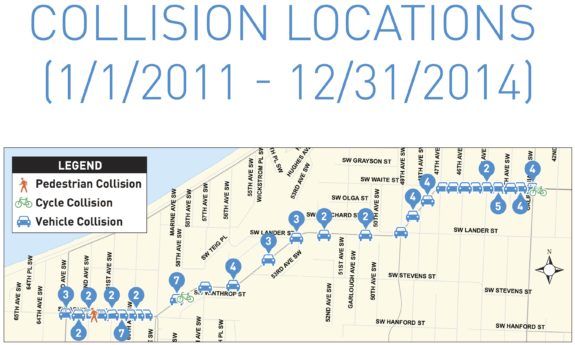 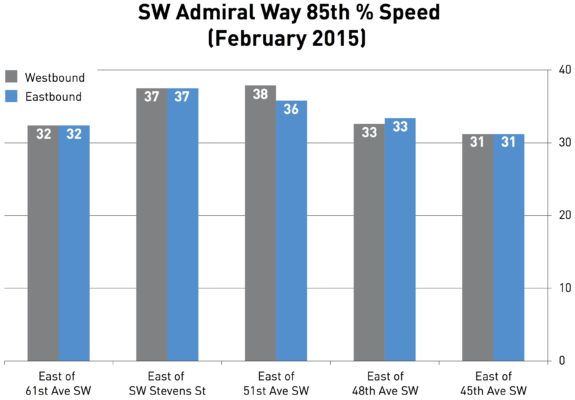 “There are lots of crashes on this street caused by speeding drivers losing control on the curves,” said Admiral neighbor and West Seattle Bike Connections advocate Don Brubeck. “My next door neighbor’s parked car was hit and exploded one night the year before last. My van was hit while parked. A guy up the street had someone plow into his company van and pushed that one into two other parked vehicles.”

According to Brubeck, even flashing warning lights haven’t slowed people on the curves. As someone who bikes, he is excited about the bike lanes, but as a neighbor he also hopes the narrower lanes will help reduce speeds to people stop crashing.

After all, damage to some parked cars is far from the worst that can happen when people lose control of their cars in a neighborhood.

Protected bike lanes were not considered because there are so many driveways along this residential street. The city needs to figure out how to create safe protected bike lanes on streets with driveways, but such designs would likely involve raised driveway crossings (which adds cost) and/or restricting parking far in advance of every driveway to improve visibility.

The worst part is that the bike lanes turn into skinny, paint-only door zone bike lanes at the top of the hill that then disappear entirely for the last block before California. So it’s yet another bike project that leaves a key connection incomplete.

For a low-budget road safety project, this will certainly be a big improvement. But it does fall short of the “all-ages-and-abilities” standard the city should be striving for.

Here’s a section-by-section look at the plans: 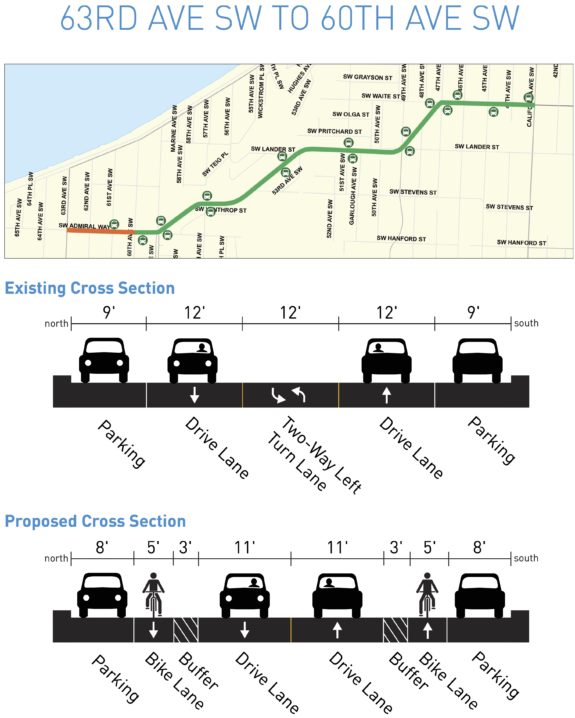 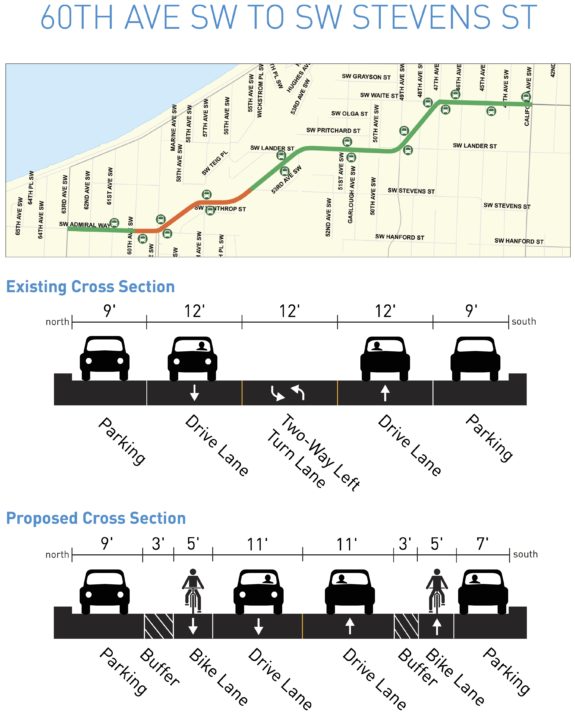 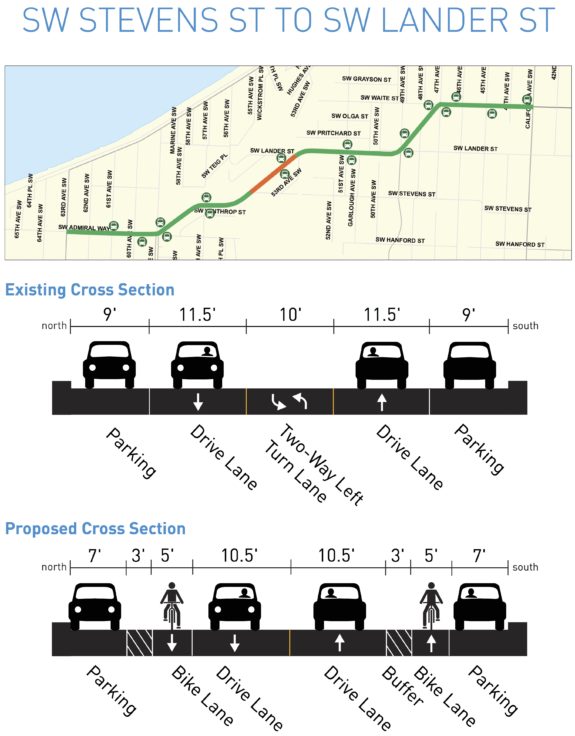 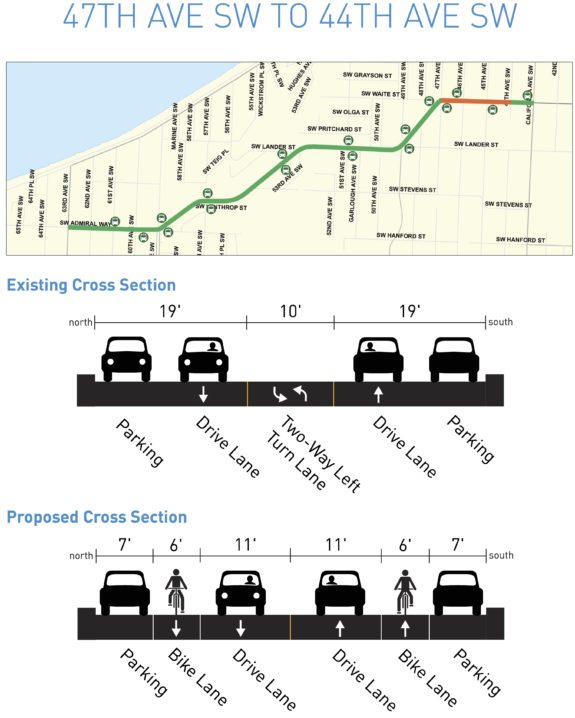 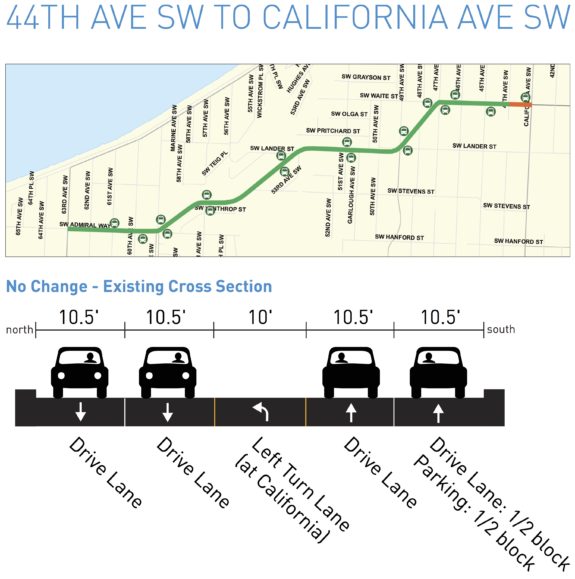 We’ve spent the last few months incorporating feedback into a street design that will reduce speeding and crashes and preserve parking where it’s in high demand.

We heard during public engagement that people are driving too fast along SW Admiral Way, crashing into parked cars, and residents are afraid to cross the street. In fact, one mother choked up at our first public meeting at the thought of walking her children across SW Admiral Way.

When we started the project data showed there had been 71 vehicle crashes, two bike crashes and one pedestrian crash between 2011 and 2014. From January 2015 through May 2016 an additional 34 crashes have occurred. This statistic shows that crashes along Admiral Way SW have increased by nearly 28% in the past 1 ½ years. The neighborhood has people who’ve lived here for decades, new families, and visitors enjoying Alki Beach. Each person deserves safe travel whether walking, biking or driving.

After sharing a few designs with the neighborhood, studying on-street parking occupancy during the summer, and talking with community members, (the map above shows) what will be installed.

You may be wondering how the new design improves safety. We have proven success throughout the city that narrower travel lanes reduce the speeds people drive and the number of crashes.

Here is how your input was included:

· Parking study. We conducted an on-street parking study during the month of August. Study times were 5-7AM, 1-3PM and 5-7PM on a sunny Saturday and Tuesday. The study confirmed what you told us. Parking spaces on the west end of the street with convenient access to Alki Beach are in high demand.

· Center turn lane. At our first public (meeting) you suggested we remove the center turn lane rather than impact on-street parking, so we did in the high-demand parking area.

· Left turn access at 57th and 59th Avenues SW. At the second public meeting, you requested left turn access to help reduce the risk of being rear-ended. We’ve included the access. To make room for them, about nine on-street parking spaces will be removed on the south side.

· Crosswalk at 61st Ave SW. We asked if you would like a new crosswalk in this location and one is included in the project.

Here is what we were not able to include and why:

Finally, we heard you want improved pedestrian crossings and supplied information on where. We’ll conduct a second round of outreach on August 20 in the form of “Walk and Talks” to gather site-specific input and talk about low-cost opportunities (visit web site for more details). The Walk and Talks will build off of comments collected through the first phase of outreach. Any improvements identified would be installed as a second phase of construction.

Our project web site at seattle.gov/transportation/swadmiralwaysafetyproject.htm has information on the walk and talk; and a flier with similar information will be mailed early August. Construction information will be shared as soon as available. However, work to restripe the street is expected to be completed before October 2016.