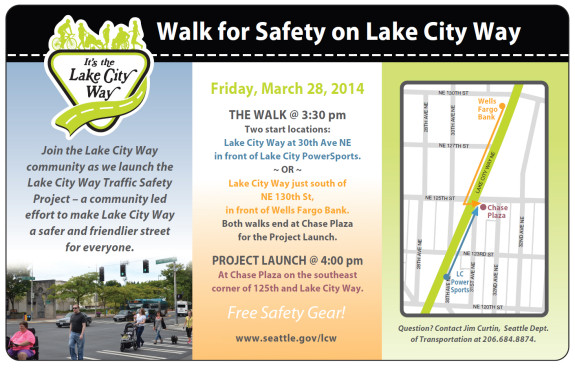 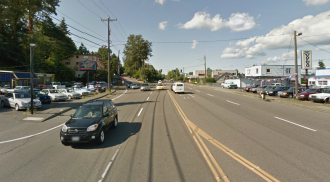 The State of Washington, the City of Seattle and Lake City neighbors will launch a coordinated traffic safety project on Lake City Way this afternoon.

Two community walks will start at 3:30 p.m. and converge at the Chase Plaza at NE 125th Street for a 4 p.m. launch event. See image above for map and details on the walks.

Lake City Way is the primary commercial street for the neighborhood, but it is also among the least walkable and most dangerous streets in Seattle. It also happens to be a state highway (522).

“For some people it’s just a state highway, but for people who live here, Lake City Way is like Main Street,” said Janine Blaeloch of Lake City Greenways, which has been very active in urging action to make the street safer. “We need to be able to share it.”

There are about 143 collisions on Lake City Way every year just on the section between NE 78th Street and the Seattle city limits at NE 145th Street, according to a five-year study. A stunning 88 people are injured in traffic collisions every year. Four people every year are killed or seriously injured. 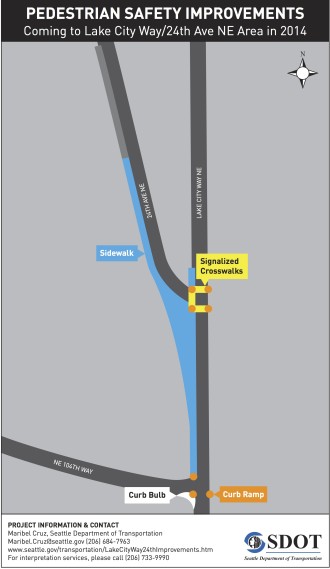 The Lake City Way Traffic Safety Corridor Project will include a variety of enforcement, engineering and education efforts. The biggest physical change will be significant crosswalk and sidewalk improvements on the street near 24th Ave NE and NE 104th Way.

“This project will bring real, tangible improvements that should make Lake City Way safer for all of us,” said Blaeloch.

Both the City of Seattle and Washington State have set the goal of achieving “vision zero” — zero traffic deaths and serious injuries — by 2030.

On Friday, March 28, at 4:00 p.m., Seattle residents and students will converge at Chase Plaza at 125th and Lake City Way to officially launch the Lake City Way Traffic Safety Corridor project, a multi-faceted program to enhance safety along the corridor.

Preceding the event, a safety walk will begin at 3:30 p.m. on Lake City Way NE at 30th Avenue NE and NE 130th Street as each group walks through the heart of the Lake City Business District, highlighting the potential safety concerns they face daily.

Immediately following the event at 4:30 p.m., law enforcement officers will begin emphasis patrols along the corridor targeting issues that commonly lead to collisions along Lake City Way, including: failure to yield to pedestrians and bicyclists, distracted driving, following too close, disregarding signals, speeding and impaired driving.

The Lake City Way Traffic Safety Project will help make Lake City Way NE a safer and friendlier roadway for pedestrians, bicyclists and motorists. The goal of this project is to reduce collisions and improve pedestrian mobility using engineering, education and enforcement efforts. The program will increase law enforcement patrols, develop a safety outreach campaign and install more than one million dollars in improvements along the roadway.

Highlights motorists and pedestrians will see include:
·         New regulatory and warning signs
·         “Your speed” signs at several locations
·         Significant pedestrian safety improvements along Lake City Way at 24th Avenue NE, 110th Avenue NE and through the heart of the Lake City Business District
·         An educational campaign intended to raise awareness about safety issues

Since January 2013, a task force made up of community members and local and state agencies has been working together to identify problems and develop action plans using data driven, low cost, near term engineering, enforcement and education solutions designed to reduce deaths and serious injuries. Please visit the project website to learn more about collisions on Lake City Way and to check out the entire Action Plan for the corridor at www.seattle.gov/lcw. For more information, please contact SDOT project manager Jim Curtin at (206) 684-8874.

These and all extra patrols are part of Target Zero—striving to end traffic deaths and serious injuries in Washington by 2030. For more information, visit www.targetzero.com. Additional information on the Washington Traffic Safety Commission can be found on the website, www.wtsc.wa.gov. The City of Seattle shares this traffic safety goal and you can read more about local plans to reduce serious collisions at www.seattle.gov/besupersafe.