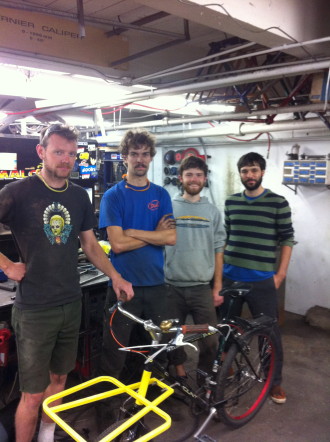 Our cycle truck is ready! From left: Colin and Garth of Cyclefab, then Danny Fisher-Bruns and yours truly, the bike’s new co-owners.

Down a back hallway in the Equinox Studios industrial building in Georgetown lies a very special shop that makes bicycles do more.

As featured over the weekend in the Seattle Times, Cyclefab is a partnership between Garth L’Esperance, Colin Stevens (you may know his work under the name Haulin’ Colin) and Michael Nazaroff. They have created a place where their creative spirit and solid work ethic comes together to create machines that work hard and bewilder, often at the same time.

For example, remember that book bike the Seattle Library has been pedaling around to community events? Cyclefab designed and built it. Ever been to a parade and saw a crazy eight-person bike full of smiling and tired people crawl by (video here)? Stevens made that crowd-pleasing machine: 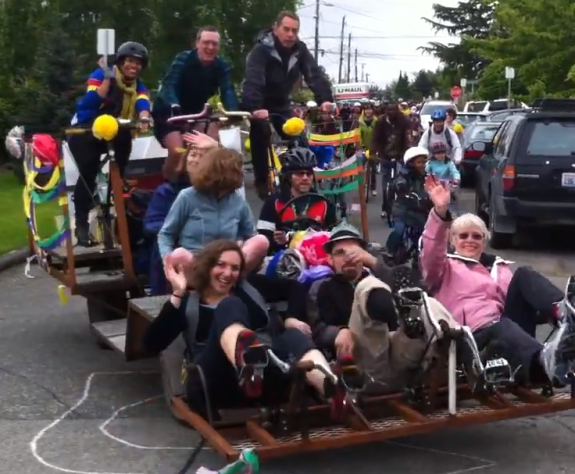 Need to move a queen-sized mattress? Got a bunch of community-grown vegetable boxes to deliver to houses around the neighborhood? A trailer from Cyclefab makes it surprisingly easy: 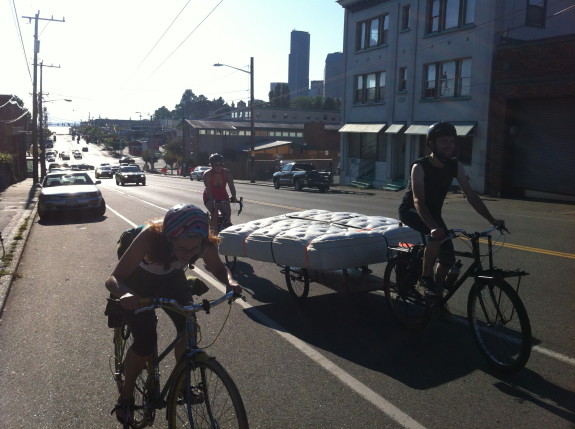 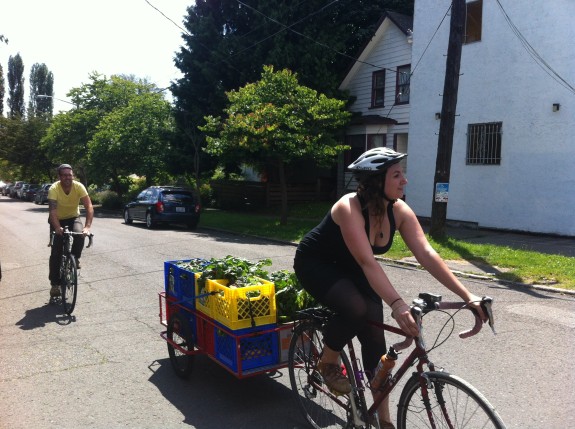 I’ve been part of several moves-by-bike in which a group of people hauled an entire household’s worth of things to their new home (if you’ve never done this, it’s an amazing experience), and Cyclefab designs played a huge role in all of them: 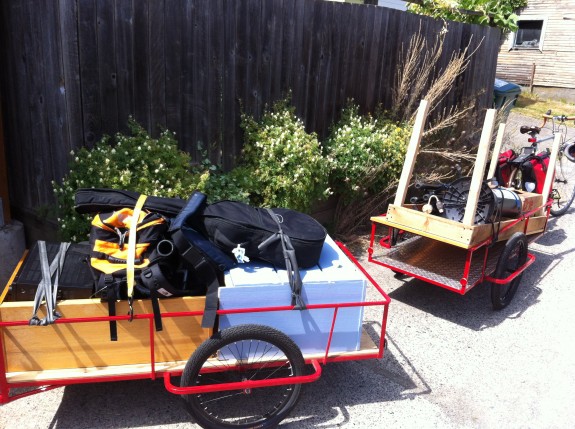 The photos above are just some of the ways that I have been able to do more and have more fun thanks to Cyclefab’s creativity and hard work. They not only make great machines, but their machines also inspire anyone who uses or sees them to expand their concept of what bikes can do. Maybe you don’t need that car to get a week’s worth of groceries, or maybe you don’t need that work truck to make local deliveries. Or maybe…

As you can probably tell, I’m an unashamed Cyclefab fanboy. That’s why it was so great to see them getting some coverage in the Seattle Times. Not only is the story good, but also the video. Check it out:

Founder and Editor of Seattle Bike Blog.
View all posts by Tom Fucoloro →
This entry was posted in news and tagged cyclefab, georgetown, haulin colin, seattle times. Bookmark the permalink.