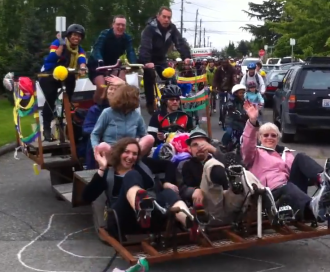 Wait, is that Sally Bagshaw and Tom Rasmussen pedaling a crazy Stevens-designed pedal-powered parade float? Yes. Yes it is.

Colin Stevens is one part of Cycle Fab, a Georgetown-based machine shop that does all kinds of custom metalworking and bicycle stuff. But he made a name for himself as Haulin’ Colin, designing and building high-capacity bike trailers and workhorse cycle truck kits and bike racks.

We’ve written about Stevens and his Cycle Fab partner in crime Garth L’Esperance before. But in a recent interview with Josh Cohen at The Bicycle Story, Stevens — dubbed “The Bicycling Mad Scientist of Seattle” — talks a bit more about how he has watched Seattle’s cargo bike culture evolve in the past decade:

It’s interesting, when my friends and I started out doing that in 2003 or 2004, it was really rare to see any kind of cargo bikes or big bike trailers around. We were the ones doing it. We thought this is a new thing that’s going to become cool and popular in a place like Seattle where people are kind of conscious about the environment and want alternative transportation means. A big city is an ideal place to do it because most of your resources are close by. We thought it was going to be people like us who wanted to transport stuff like lumber or bicycles. What has actually happened is it’s family biking that has made cargo bikes popular. I think the vast majority of cargo bikes now are sold to parents who want to haul their kids around. That has become the driving force, which is pretty cool. I didn’t expect that, but it is great that that’s what’s made it popular.

Want to see Cycle Fab’s cargo-hauling bikes in action? You’re pretty much guaranteed to see a bunch of them at Cascade Bicycle Club’s bike move November 30.