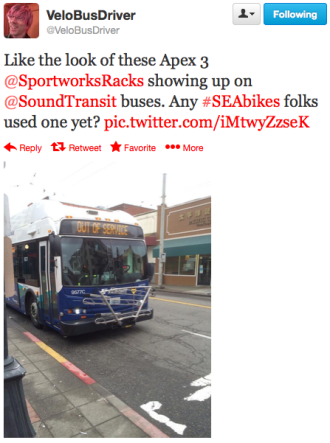 But, as express routes, getting from your home or workplace to the bus stop or transit center is often the most difficult part. Taking a slow local bus, then waiting to transfer is one way to get there. Driving to a park-and-ride is another.

But many people have figured out the best way: Bike there.

Unfortunately, for many popular routes, so many people want to bring their bikes on the bus with them that the racks are often at capacity.

Well, Sound Transit is trying to help by replacing nearly all their two-bike racks with new ones that can hold three bikes. And unlike the three-bike racks installed on King County Metro buses, the newer SportWorks model is easier to use (the arms that hold the bike steady tend to be less “sticky,” at least the couple times I’ve used them).

UPDATE: Sound Transit sent us a correction to their earlier statement that all buses would be upgraded: “One thing we should correct about new bike racks – they won’t be used on the MCI buses (some Pierce Co. routes).”

Bike use is growing so quickly in the Puget Sound region that adding one extra bike spot to each bus is not going to completely solve the bike + transit capacity issue. But it could very well save you from waiting in the rain for the next bus.

Bringing a bike on a bus is an awesome stop-gap solution for areas that are in the early stages of developing a culture of using bikes for transportation. Indeed, King County and Woodinville-based rack maker SportWorks pioneered the bike-rack-on-a-bus concept in the 90s. The concept is now in use by hundreds of metro areas all over North America. This might be one of the Seattle area’s most awesome and overlooked cultural exports.

But there is a clear problem of scale: A bus can really only carry a couple bikes, but it can carry a lot of people. If more than two or three of those people want to bring a bike, someone has to be left behind. Too many people wanting to bike is a good problem to have, of course, but it means that we need to come up with a more scalable solution.

Enter: Puget Sound Bike Share. With plans to launch in spring or summer, PSBS could provide public bikes near the end of trips in major destination areas and near transit centers. This way, there is no need for everyone to bring their own bikes on the bus.