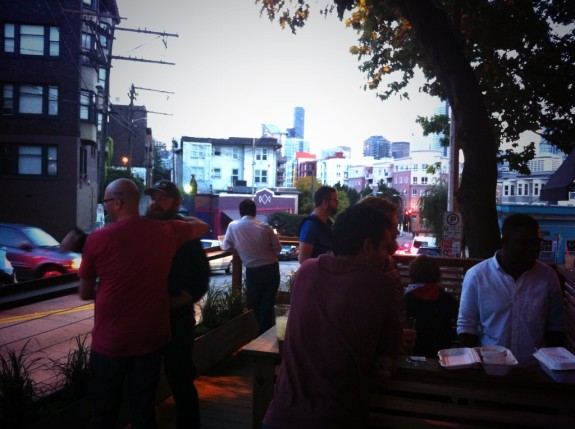 Seattle’s first parklet at Howell/Olive Way. Hard to believe this space used to be reserved for storing two cars

It’s fairly difficult for the average person to stay awake during a discussion about issues like parking minimums for developments and market-rate metered parking spaces (though Sightline does a heroic job of making it interesting). Yet if a project arises where a handful of car parking spaces are slated for removal, all hell can break loose without warning and you’re facing a room full of angry neighbors.

Even when the city spends years studying parking on a street to prove conclusively that few people are even using it (*cough*), a couple people will still get mad enough about parking removal that they attract TV news stations (well, maybe that’s a bit of a chicken/egg situation).

I know it is very frustrating to find a parking space in many parts of the city. But with driving on a steep and sustained declined in Seattle and the population growing, it often seems silly to have so much space for storing cars and so little space for hanging out with friends, eating some take-out or otherwise living city life. 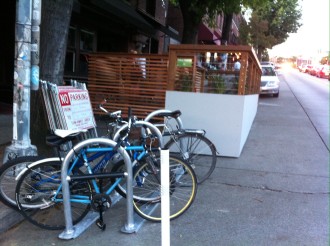 That’s where Seattle’s first parklet comes in. Located at Howell and Olive Way on Capitol Hill, the new tiny park includes a public space with a killer view (see photo above and imagine it was taken by a good photographer) and a separate space for Montana bar customers to drink. Yesterday evening, just hours after it opened, the place was packed.

Montana co-owner Rachel Marshall held court with the TV cameras — and one neighborhood blogger — trying her best to be diplomatic with the sometimes confused TV crews. “90% of my customers are pedestrians,” she said when asked, again, about the loss of parking in front of her neighborhood bar.

So here’s a chance to replace two car parking spaces with six bike parking spaces, a small public park and a space completely full of patrons. This is a huge win for the business and the neighborhood. Now that it’s in place, it seems crazy we didn’t do this sooner.

Of course, a lot of our parking is needed for businesses and the large number of people who still get around in cars. And I prefer on-street parking to unnecessary travel lanes that encourage speeding and make streets more dangerous than they need to be. But maybe we don’t need ALL of the parking we have, and we certainly don’t need more (which is good because we don’t have any more room for it).

The parklet was constructed just in time for Park(ing) Day 2013, which will take over a handful of car parking spaces throughout the city tomorrow (Friday) as people turn them into tiny little parks in whatever style they see fit.

There are many interesting ones planned, but the bikiest will probably be the Cascade Bicycle Club/Commute Seattle one-block protected bike lane on 2nd Ave between Madison and Marion. It will be a chance to take the Pepsi challenge and compare the experience of riding in the awful, door zone bike lane to biking in a protected bike lane.

That alone is worth heading downtown for a bike tour of Park(ing) Day parks.

Here’s a map of park locations, via the city: