After years of delay and some significant changes in response to neighbor concerns, the city is finally completing the ten-block section of missing bike lanes on Roosevelt between 75th and 85th.

Well, more accurately, bike “lane,” not “lanes.” The project would continue the Roosevelt pattern of climbing lane uphill, sharrow downhill that was installed years ago north of 85th.

Initial painting work has started and King 5 reports that work is expected to be complete by the end of September.

While this is not the kind of bike lane project that will be inviting to people of all ages and abilities, it will make the vital north-south route far more comfortable and safe than it is today. It also makes the road configuration more consistent and connects the University Bridge to NE 125th.

The project also makes it even more vital that the city creates a safe way for people biking north on 12th to cross over a block and continue north on Roosevelt. South of 75th, Roosevelt and 12th Ave are one-way streets, but north of 75th Roosevelt is a two-way street. Unfortunately, this is the current option for getting from the bike lane on 12th to the new bike lane on Roosevelt: 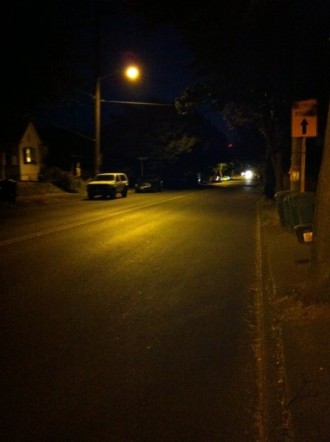 Photo I took in 2010 of parking utilization on Roosevelt.

Despite the fact that it only took simple observation to see that almost nobody parks on Roosevelt between 75th and 85th, the city gave into neighborhood outcry about the proposed parking consolidation plans and delayed the project three whole years.

The city conducted almost comically extensive studies of the street use, including exhaustive parking count data taken from all seasons and time of day. What did they find?

Almost nobody parks on Roosevelt between 75th and 85th. And at every single moment in time throughout a year, every car parked on the street could easily fit on one side of the street with room to spare. So they proposed implementation of a design that would include parking on the west side of the street only. 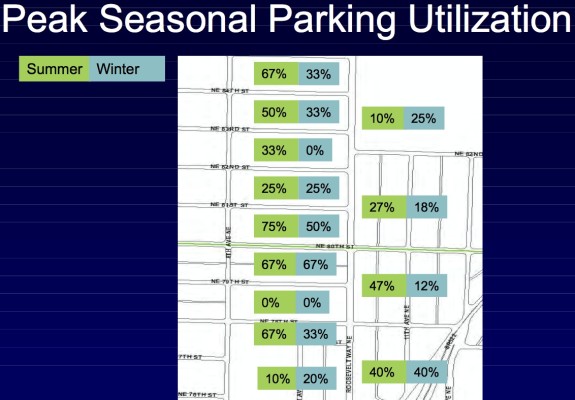 The absolute worst case scenario is that someone might have to walk a block after finding a free parking space to store their car. But probably not.

Of course, that has not stopped at least one project opponent from claiming that the bike lane will destroy the neighborhood. Note to David and others who share his views: We can be allies! I agree with him that the city should install crosswalks. Stop making silly claims that bike lanes will destroy your neighborhood. Instead we can work together to make sure needs like crosswalks are included in these plans. Imagine if all that money SDOT wasted studying parking (non)use had instead gone to design and installation of crosswalks or neighborhood art, park benches, etc. People who ride bikes live in neighborhoods, too. Including yours!

While it’s exciting to see this project finally happen, it’s frustrating that it took so long that now the design seems rather out-dated. The draft Bicycle Master Plan update suggests that some kind of protected bike facility should be installed in the Roosevelt corridor, since it is the most obvious north-south bike route option in the area. The new climbing lane will be great for confident and moderately-confident people on bikes, but it leaves out people who want to bike but won’t feel safe screaming down a hill while sharing a lane with motor vehicles and buses.

Here’s a presentation of SDOT data on the project:

This entry was posted in news and tagged maple leaf, roosevelt. Bookmark the permalink.