Mayor McGinn announced Tuesday that the city will spend $700,000 on near-term paving work and a possible temporary cycle track on E Marginal Way. The city will also spend $200,000 on design work for a permanent longterm solution, which will likely include a future full reconstruction of the street.

A dangerous stretch of industrial road, E Marginal Way is a vital bicycle corridor and one of the biggest impediments to cycling from West Seattle and parts of South King County. Long considered a top priority for cycling improvements in Seattle, E Marginal Way got increased attention after Lance David died in a May 1 collision with a truck at S Hanford Street.

The new investments also include funds to move the Westlake Cycle Track through final design and into construction, as well as work to improve walking and biking safety around Lower Bridge to West Seattle. This includes fixing dangerous trail crossings and improving the infamously awful intersection at W Marginal Way/SW Marginal Pl/Delridge Way SW/Chelan Ave and the Alki Trail: 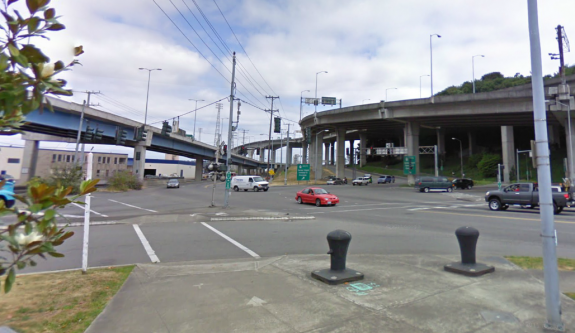 The funds come from savings after the Spokane Street Viaduct project came in millions under budget. More details on the investments, from the Mayors office:

The $3.25 million in funding will be used for the following projects:

This is in addition to the previously announced $11.75 million in transportation investments from Spokane Street Viaduct savings. That funding was included in the First Quarter Supplemental Budget, and includes: