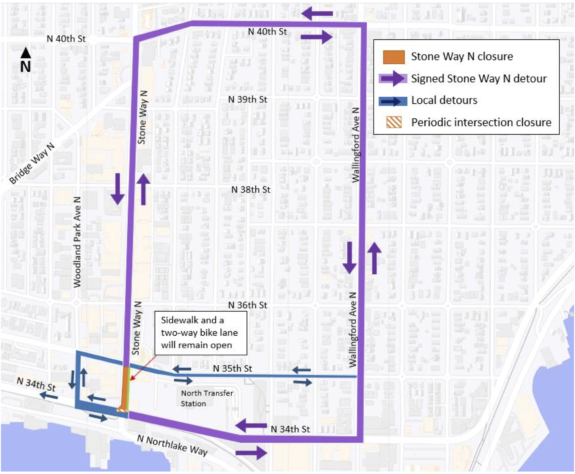 General purpose traffic detour map. Crews will maintain a walking and biking paths through the construction area. Map from SPU.

Seattle’s least-discussed megaproject is coming to Stone Way in Fremont/Wallingford, but crews have plans to maintain space for biking and walking.

Seattle Public Utilities’ Ship Canal Water Quality Project is estimated to total $570 million, a cost that could still increase before it is complete, the Seattle Times reported. The project will build large new tunnels and catchment basins designed to prevent “combined sewer overflows” that happen when rainwater overwhelms the sewer system and sends raw sewage into Puget Sound. Eww.

Part of the project involves a new facility at 35th Ave N and Interlake near the Evo bike shop as well as a new pipe traveling from that facility under 35th and Stone Way. These streets will be closed to general traffic, but a bikeway and sidewalk will remain open along the east side of Stone Way throughout construction. An SPU project manager reached out to alert to Seattle Bike Blog to the upcoming work (thanks, Stephanie!). Construction is set to begin as early as January 30. Details from SPU:

SPU’s contractor will periodically close the north portion of N 34th St, near the intersection of Stone Way. These closures may make the bike lanes on Stone Way N inaccessible from the south. Cyclists will be asked to detour to other north-south streets or dismount bicycles to travel along crosswalks and sidewalks around the work area. Our contractor will try to schedule N 34th St closures at night, but some daytime closures of N 34th St will be necessary. We will continue to share more information about cycling detours on our project website and email updates.

Despite being such a large project largely located along the Burke-Gilman Trail route, SPU has really set the standard for bike detours. A few years ago, they detoured the trail in Fremont, and it was reliable and comfortable. This is also the project that has been responsible for the trail detour near the Ballard Fred Meyer. Obviously, it’s not as nice as having the trail open, but it works and is reliable. So I’m hopeful the Stone Way detour will meet the same standard.

The biggest impact will likely be for people who bike on the detour route, which follows N 40th Street, Wallingford Ave N and N 34th Street. Expect big increases in traffic there. In fact, it might even make sense to take Stone Way if it ends up having lower traffic thanks to this project. Also be ready for increased traffic on other nearby side streets like Woodland Park Ave N, N 36th Street (SPU/SDOT might want to protect the Troll from detour traffic) and Interlake Ave N.