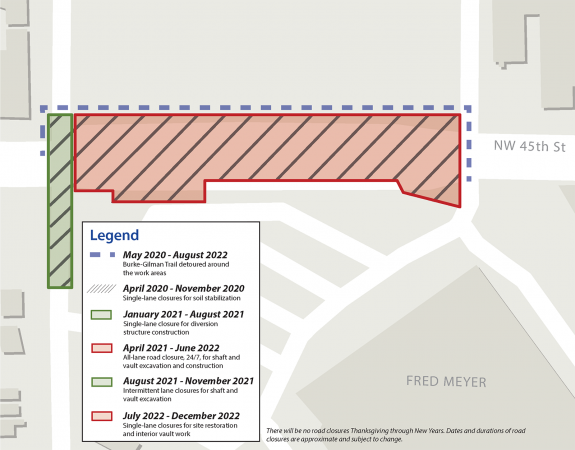 The Ship Canal Water Quality project, the $500+ million effort by Seattle Public Utilities and the King County Wastewater Treatment Division to prevent sewage from spilling into Puget Sound during heavy rains, will close the section of the Burke-Gilman Trail next to the Ballard Fred Meyer parking lot starting in early June.

The detour will send users across the closed NW 45th Street to a temporary trail on the north side of the street. The detour will be in place until August 2022.

SPU was responsible for a long closure and detour of the Burke-Gilman Trail in Fremont back in 2018, and the detour was largely very well done with full separation and gentle transitions the whole way. If this detour is as good as the Fremont one, it should be no trouble. The trickiest part will likely be the railroad track crossing at 11th Ave NW. Those tracks have long been a major hazard to people biking.

The project will create a massive underground stormwater storage tank to capture water from Ballard, Fremont and Wallingford so that it does not overwhelm the capacity of the sewer system. When that happens, a “combined sewer overflow” occurs, meaning raw sewage and rainwater are mixed together and flow untreated into Puget Sound. Eww. Instead, the tanks will fill with water during a heavy rain, then will be emptied more slowly into the West Point Treatment Plant in Discovery Park at a rate the system can handle. The project won’t be fully operational until 2025.

This is why projects like Seattle’s Street Edge Alternative street in Broadview make so much sense. By having stromwater run into rain gardens along the street rather than sewers, the water does not overwhelm the sewer system helping to keep waterways clean and saving SPU and King County from needing to build massive and expensive underground storage tanks. Plus, as SDOT Traffic Engineer Dongho Chang pointed out in a recent tweet, the street is also safer now thanks to the traffic calming from the rain gardens:

No police reported collision on this street… for the past 15+ years. pic.twitter.com/hAG9BNfyYH

So we get a safer and greener street, a cleaner Puget Sound and save money on sewer infrastructure. That’s a lot of wins in a single project. Sure, it’s not cheap to build streets like this. But it’s also not cheap to build stormwater tunnels. At least the street project has other benefits, too.

By the way, this is also a big benefit of installing rain barrels on your house in Seattle. It’s partly about saving water, sure, but it’s mostly about capturing water during heavy rains so it doesn’t flow into sewers. SPU has a great program where you can buy a discounted rain barrel made from old pickle and olive barrels. They will deliver it to your house (in Seattle) with all the fixtures and everything already installed. It’s very cool.

6 Responses to Trail Alert: Burke-Gilman Trail will be detoured near Ballard Fred Meyer