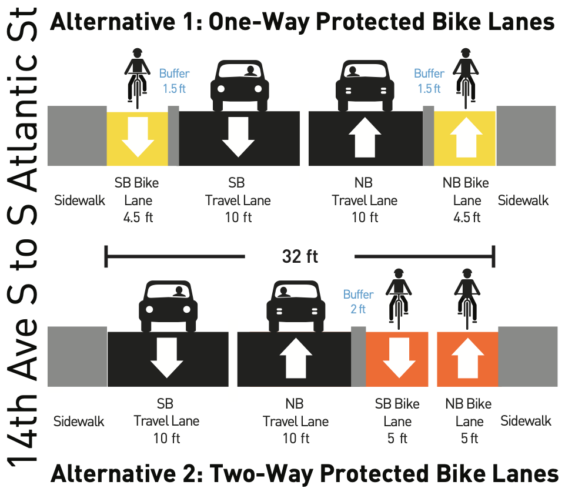 The biggest decision point presented in SDOT’s Beacon Hill bike lane survey (open through January 6) is whether the city should build one-way bike lanes on either side of 15th Ave S or one two-way bike lane on the east side of the street. SDOT’s Hallie O’Brien shined a little more light on the pros and cons of each option during a conversation with the Seattle Bicycle Advisory Board this week.

“Both of these facility types are recommended by our NACTO guidelines as safe facilities, and they follow our design standards for width,” she said. “Safety wise, I think they’re both safer than what’s out there today.”

In our previous story walking through the project’s options, we put it this way:

One-way bike lanes are usually preferable to two-way bike lanes on two-way streets unless there are special circumstances. For example, if a road is next to a hillside, waterway or park, then a two-way bike lane might make a lot of sense because there would be limited traffic crossings and driveways. Another example would be a road where the connections to existing trails or bike lanes would be easier and safer with a two-way lane. A two-way lane might also sometimes be a necessary compromise if there simply is not enough roadway to accommodate two one-way lanes. However, none of these seem to be the case on 15th, at least not at first glance.

That point still holds, but O’Brien presented some possible pros and cons to consider. The one-way lanes might be more comfortable on the long hill section because users in each direction might be going much different speeds. But a con is that in the most constrained parts of the street, the lanes would be only 4.5-feet wide plus a 1.5-foot barrier. For the two-way lane, one pro is that there would be more space. At 10-feet wide plus a two-foot barrier it is still on the skinny side for a two-way facility, but there is more wiggle room. A con is that the transition points are more awkward, especially at the José Rizal Bridge.

O’Brien mentioned the “NACTO guidelines,” referring to work by the National Association of City Transportation Officials to collect and organize accepted practices within the US for building modern transportation features like protected bike lanes while following engineering standards and guidelines. NACTO has resources about both one-way and two-way protected bike lanes. They do not make a blanket statement about which is generally preferred, a decision left to each project team. But the page’s list of “typical applications” mentions much of what I noted earlier, such as situations where there are fewer driveways on one side or where the connections at each end would work better.

But as anyone who has been biking around town in the past month knows all too well, perhaps we need to add another item to the needs list: A maintenance plan. I looked up the technical specs for the Mathieu MC210 Azura Flex street sweeper, the same model as the city’s bike lane-sized street sweeper OK Broomer, and its minimum sweeping width is about 4.2 feet depending on the sweeping attachments installed. So it should fit in even the sub-standard 4.5-foot lane sections, though SDOT should probably double-check to be sure because 15th Ave S has a lot of wonderful street trees ready to drop their leaves into these planned bike lanes.

Another consideration is the actual condition of the roadway space. The more constrained a bike lane gets, the more vital it is that all the space is usable and safe. For example, all storm drains must be completely safe to bike over because riders won’t have much space to avoid them like they usually would. That means no jarring bumps or wheel-grabbing gaps. It’s also extra important that the gutter does not slope steeply into the curb, which I don’t believe is an issue on 15th though I have not checked the entire length. And finally, the pavement needs to be flat and in good shape.

For all these reasons, it is worth keeping a two-way option on the table just in case any of these real-world checks reveal issues with the one-way lane design. And before anyone asks, widening the street is not a practical option. Moving the curb even one foot would be enormously expensive and well beyond the project’s budget and timeline. It would also destroy a lot of mature street trees.

It is still worth pushing for at least 5-foot lanes whenever possible. This would likely require either 9.5-foot general purpose lanes or a more significant reimagining of the street as a slower residential-focused street rather than the “minor arterial” it is classified as today. According to the city’s 2019 traffic count, the constrained section of the street carried about 11,900 vehicles per day, which includes bikes. That’s a lot for a typical residential street, but it’s not much very high for an arterial. What if the most constrained sections (which do not have bus routes) did not have a center line and instead implemented significant traffic calming to slow speeds? Slower speeds would also have significant safety benefits for all users and would improve crosswalk safety all along the street.

Comments on the delay

Bike Board members also asked about the delay that pushed project construction back to 2024. O’Brien stressed that this delay was not due to any other project getting priority, specifically noting the Green Lake bike lane. We and others noted that the Green Lake Outer Loop bike lane seemed to get expedited at the same time that the Beacon Hill bike lane got delayed, but these were unrelated according to O’Brien. The projects have been operating entirely on their own timelines, she said.

In our post, we were noting that the two projects seemed to get different levels of urgency, which is true. The timing of the two announcements also made the difference feel very stark. If the city really put Beacon Hill at the top of its to-do list, it would be done by now or would at least be on the original schedule. However, I did not mean to imply that those resources were reallocated to Green Lake. The Beacon Hill project team has been putting in work, but they are taking an approach with lots of time for community feedback. And despite the Green Lake project taking over a lane on a state highway, the Beacon Hill project is significantly more complicated.

The project is still in the development stage, and SDOT will spent 2023 going through the detailed design phase to get it ready for construction in 2024. The new lanes, if designed well, will be game-changing for much of south Seattle.