Later this year, the Seattle Department of Transportation is set to complete improvements that will make it easier to bike through one of Beacon Hill’s trickiest intersections. The changes planned at 15th Ave S and S Columbian Way come three years after the department was originally scheduled to implement a much bolder reconfiguration of the intersection here, but that iteration of the project was cancelled after local opposition.

SDOT is repaving a stretch of 15th Ave S, from Spokane to Angeline Streets. Most of the street here is two lanes in both directions without much street parking, and isn’t getting any additional space for bikes. This is unfortunate, as there’s plenty of room and no parking to fight over. Traffic volumes from SDOT’s last citywide volume report show similar vehicle volumes on 15th Ave S as on the segment of Rainier Ave S which has been converted to one lane in each direction with a center turn lane. It also has very similar volumes to S Spokane Street, also getting repaved here, which already has one lane in each direction with painted bike lanes. 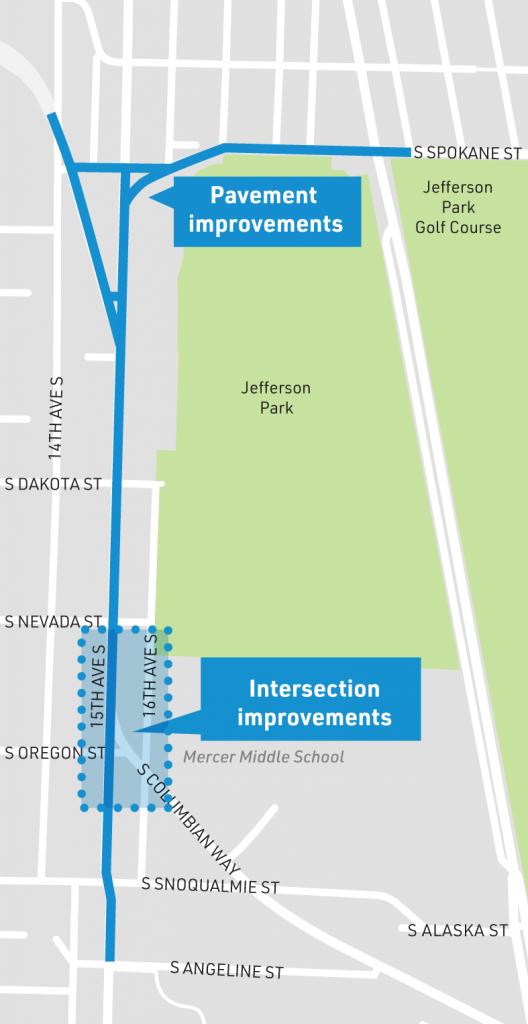 SDOT is currently planning an all-ages bike route across Beacon Hill for 2023, and currently plans to route people biking onto Beacon Ave in this area. But on the north end of the hill, advocates are pushing for the protected bike lane to be routed onto 15th Ave. At the south end of Beacon Hill, SDOT already installed bike facilities on Swift Ave, which is what 15th Ave turns into. 15th Ave will continue to make sense as a bike corridor and an opportunity was missed here. 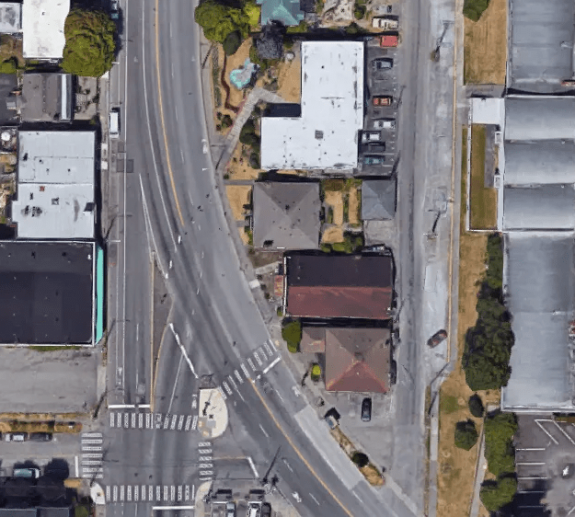 Arial view of the current configuration of 15th and Columbian Way.

As for the improvements at 15th Ave and Columbian Way, the plan that would have been implemented in 2018 directed all southbound traffic onto the curve of Columbian Way, with drivers wanting to continue on 15th having to make a right turn. This would have dramatically reduced the size of the massive intersection. A second crosswalk across the intersection from the middle school was to be added. A public plaza would have been created out of the excess street space, with space for people biking to get through the intersection via the crosswalks. 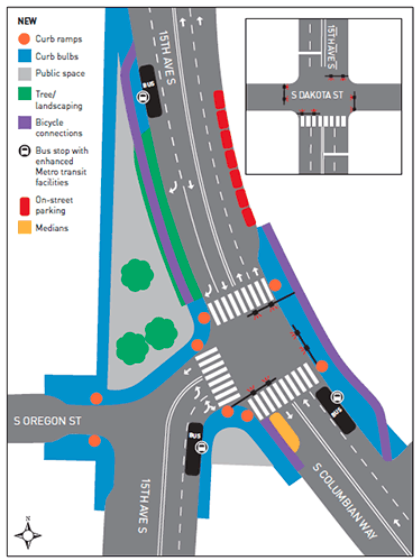 The original design funded and scheduled to be installed in 2018.

The design now planned maintains one through lane on southbound 15th Ave S, doesn’t add any additional pedestrian crossings, and doesn’t include any space for people biking northbound from Columbian Way. But it does add a protected bike lane on southbound 15th Ave S by moving the parking in this stretch next to the travel lane. That protected bike lane starts very slightly out of frame at the top of the following image. 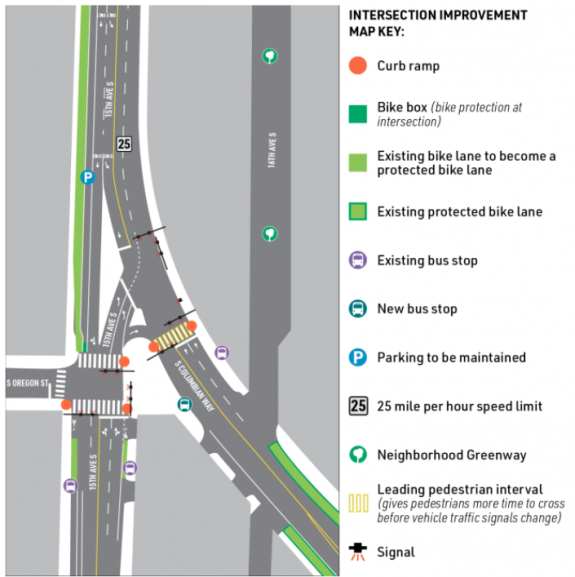 The planned 2021 improvements to 15th and Columbian. (Click to enlarge)

On the south side of Oregon on 15th Ave, people biking will share space at bus stops with people entering and exiting buses, matching similar designs seen recently on NE 65th Street and 12th Ave S. Southbound, the bike lane disappears very shortly after the bus stop, making its utility questionable. Northbound, the bike lane extends nearly two blocks down to S Angeline Street, the street where the Chief Sealth trail terminates. But at Oregon street, people riding northbound are dumped onto the sidewalk. 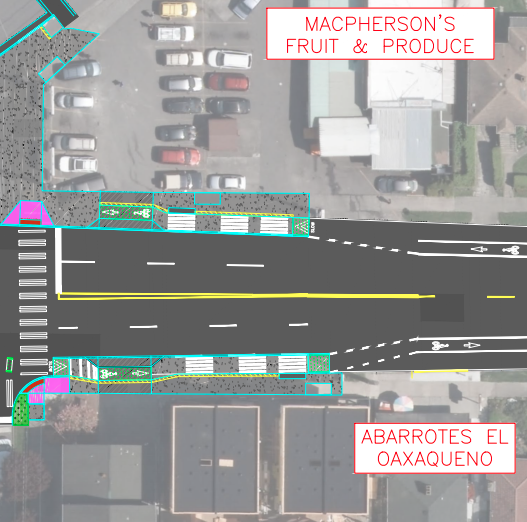 Though the original redesign here was approved in 2016, improvements at this intersection date to at least 2008, when a reconfiguration very similar to the one proposed was suggested in an SDOT commissioned study, the Southeast Transportation Study. 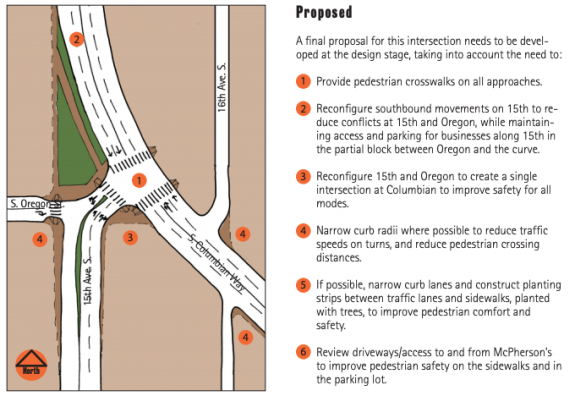 Proposed redesign for 15th and Columbian from 2008.

With the project going in now, after years of delay, with most of the changes proposed along the way discarded, is a testament to just how much of an uphill battle it is to redistribute essentially any current street space allocated to vehicles.

During the last full Seattle Public Schools school year (2018-2019), the southbound school zone speeding camera on 15th Ave S was the most active single camera in SDOT’s school camera arsenal. Over 800 tickets were issued on average per month during the course of the year, 8,012 in total, underlining just how much this intersection redesign is ultimately a school safety project. It’s also likely there would be zero changes happening here if not for the advocacy of groups like Beacon Hill Safe Streets, despite existing plans here on the books. The changes here are clearly hard-won, and should have an impact.

This weekend and next weekend, SDOT will be closing Columbian Way immediately south of 15th Ave S. Traffic will be detoured via Snoqualmie Street and 15th Ave S. You can read more about the planned improvements here.