UPDATE: It passed by a vote of 7-1 (Nelson no, Pedersen abstain).

After a series of successful and popular experiments with extended car-free days on Lake Washington Boulevard in recent years, District 2 City Councilmember Tammy Morales has proposed $404,000 in Parks District funding in 2023 and 2024 to construct a permanent biking and walking path on the historic lakeside street from Seward Park to Mount Baker Beach.

The budget amendment language (PDF) does not specify design details, noting only that it would “add $202k in 2023 and $202k in 2024 for protected path on parks property that can accommodate people using mobility devices, riding bicycles, and walking along Lake Washington Boulevard from Mount Baker Beach to Seward Park.” Every City Councilmember is also a member of the Seattle Park District Board, which was created as a special funding district by a 2014 ballot measure. The Park District Board is scheduled to meet at 3 p.m. today (September 27) following the City Council meeting.

Seattle Neighborhood Greenways put together an online form people can use to support the project and the Parks District funding amendment. Though they note that “the exact design will be determined through an equitable engagement process,” they provided some concept images to show one potential option with a car-free street from Mount Baker Beach to Genesee Park and a protected bike lane or trail from Genesee to Seward Park. 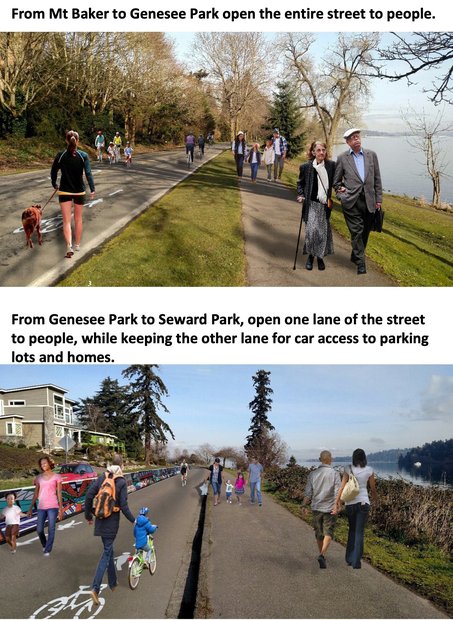 A 2021 survey found overwhelming support for the city’s car-free Lake Washington Boulevard experiments with a majority of respondents preferring permanent walking and biking space on the three miles from Mount Baker Beach to Seward Park. This stretch of roadway has been home to the city’s car-free Bicycle Sundays program since 1968, so people are very familiar with how the street works with limited car access.

But people need to be able to safely bike every day, not just on select Sundays during the summer. Ever since the first Bicycle Sunday in April 1968, people have been saying that it be like this every day. “Let us hope we can avoid ‘only on Sunday’ bicycling and enjoy it day in and day out during the year,” wrote R. Stuart Thompson in a letter to the Seattle P-I May 7, 1968, (PDF) following the first every Bicycle Sunday. Hey, better late than never. 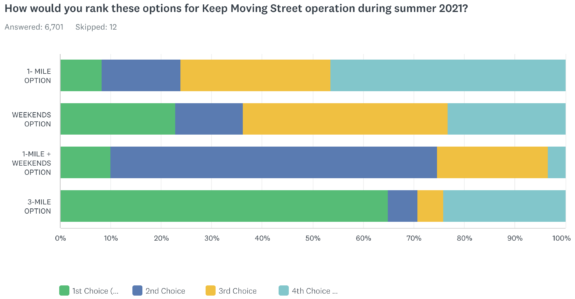