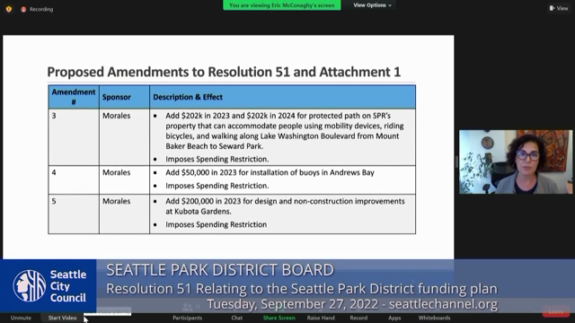 You can watch the meeting on Seattle Channel. Discussion of this item begins around 42:00.

The Seattle Park District Board approved funding a path on Lake Washington Boulevard, voting 7–1 to include $404,000 to the 2023-24 budget plan.

The historic boulevard is one of the city’s original Olmsted Boulevards, which were constructed in the early 1900s as Parks projects. Even though it looks like a regular street, the boulevard is still Parks property, so funding for the biking and walking project would go through the Park District budget rather than the city’s transportation budget.

“This funding will help allow all users to enjoy the boulevard,” said Board Member and District 2 City Councilmember Tammy Morales, the sponsor of the funding amendment. All City Councilmembers are also Park District Board Members. “This is a follow-up to the budget item that we got in last year’s budget to do equitable community outreach and visioning for Lake Washington Boulevard. The idea is for this funding to be used to construct the option that’s chosen through that process.”

The idea faced nearly universal support except from Board Member and at-large City Councilmember Sara Nelson, who argued against the project on the basis that District 2 is getting too much funding from the Parks plan. She also voted against other Morales amendments. Nelson argued that she was standing up for “constituents across the city who want to see fairness and equity as we determine our investments.” She then argued in favor of “geographic equity.” District 5 Councilmember Debora Juarez bristled at Nelson’s suggestion that District Councilmembers don’t consider the whole city. Morales also countered Nelson’s argument by saying that “we are considering the notion of targeted universalism, which is that those areas—those people—who have been the least invested in for generations do get some prioritization. […] That’s how we start to repair the harm done to some of these communities.”

District 4 Councilmember and Transportation Committee Chair Alex Pedersen abstained from voting and did not speak to it.