Update: due to the anticipated snow event this weekend, the closure of Lake Washington Boulevard outlined below has been postponed to Monday February 15. It will run through Sunday the 21st as planned.

A stretch of Lake Washington Boulevard just south of Mount Baker Beach will open to people walking, biking, and rolling starting this Friday February 12 Monday February 15 through Sunday February 21, Seattle Public Schools Winter Break, as well as April 9th through the 18th, for SPS Spring Break. The street will be closed to vehicles between Stan Sayres Boat Launch and Mount Baker Beach during that time. 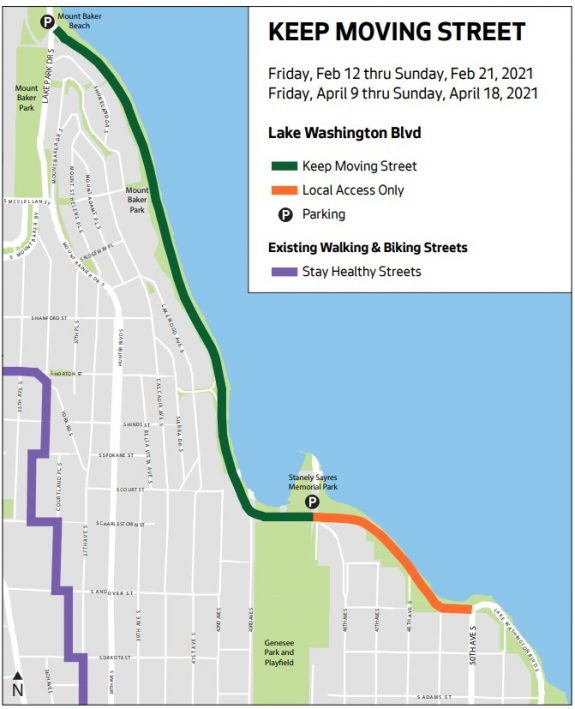 This is the same stretch of Lake Washington Boulevard closed to people driving during the winter holidays last year, and doesn’t extend all the way south to Seward Park like the Summer 2020 closure did.

This closure sets the stage for another Summer-long open street on Lake Washington Boulevard but begs the question: if we can open it for a week at a time, why not indefinitely, at least for this year? People who use this route for transportation, given the lack of dedicated bike facilities parallel to it, don’t disappear at the end of school breaks.

The full Lake Washington Boulevard closure last Summer was the third-most-used Open Street in the city behind West Seattle’s Beach Drive and Green Lake Drive in North Seattle. The idea of permanently closing it to vehicle traffic, which we have done before with Interlaken Boulevard in north Capitol Hill (another Olmsted legacy route), remains hotly contested. Any path to a change in use would go through the Seattle Parks board, which has control over the street since it technically rests on park property.

In the meantime, we’ll enjoy every weeklong closure we can get.