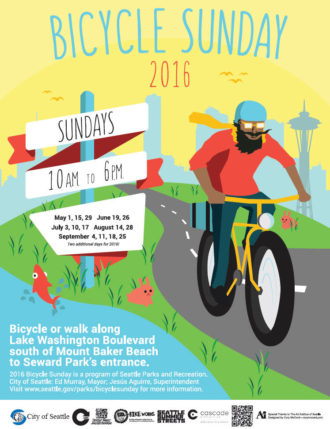 We missed this news earlier this spring, but there will be two more car-free days on Lake Washington Boulevard this summer than in recent years.

For the past five years, there have only been 12 Bicycle Sundays, but previous years saw as many as 19, or most Sundays May through September (the event typically avoids major events like Seafair).

The route runs from Mount Baker Beach to Seward Park. Remove car traffic from the street for a few hours and it fills with people of all ages smiling and having fun.

May is Bike Month, and we are celebrating with the return of Bicycle Sundays! On scheduled Sundays from May to September, a portion of Lake Washington Boulevard will be closed to motorized vehicles from 10 a.m. to 6 p.m. Seattle Parks and Recreation invites everyone in the community to bike, jog or stroll along the boulevard between the Seward Park entrance and Mount Baker Park’s beach during these times.

Last year, more than 36,000 people participated in Bicycle Sunday events. With the beautiful weather we’ve been experiencing, and with TWO additional days this year, 2016 will no doubt be another banner year.

Founder and Editor of Seattle Bike Blog.
View all posts by Tom Fucoloro →
This entry was posted in news and tagged bicycle sunday. Bookmark the permalink.

1 Response to Bicycle Sunday is this weekend, 2016 gets two extra car-free days on Lake Washington Blvd